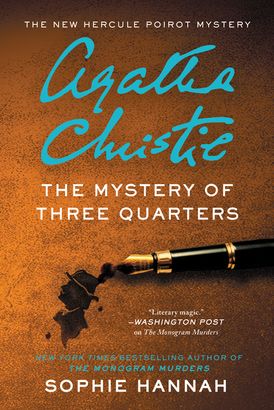 The world’s most beloved detective, Hercule Poirot—the legendary star of Agatha Christie’s Murder on the Orient Express and most recently The Monogram Murders and Closed Casket—returns in a stylish, diabolically clever mystery set in the London of 1930.

“We Agatha Christie fans read her stories--and particularly her Poirot novels--because the mysteries are invariably equal parts charming and ingenious, dark and quirky and utterly engaging. Sophie Hannah had a massive challenge in reviving the beloved Poirot, and she met it with heart and no small amount of little grey cells. I was thrilled to see the Belgian detective in such very, very good hands. Reading The Monogram Murders was like returning to a favorite room of a long-lost home.”
— Gillian Flynn, author of Gone Girl

Hercule Poirot returns home after an agreeable luncheon to find an angry woman waiting to berate him outside his front door. Her name is Sylvia Rule, and she demands to know why Poirot has accused her of the murder of Barnabas Pandy, a man she has neither heard of nor ever met. She is furious to be so accused, and deeply shocked. Poirot is equally shocked, because he too has never heard of any Barnabas Pandy, and he certainly did not send the letter in question. He cannot convince Sylvia Rule of his innocence, however, and she marches away in a rage.

Shaken, Poirot goes inside, only to find that he has a visitor waiting for him — a man called John McCrodden who also claims also to have received a letter from Poirot that morning, accusing him of the murder of Barnabas Pandy...

Poirot wonders how many more letters of this sort have been sent in his name. Who sent them, and why? More importantly, who is Barnabas Pandy, is he dead, and, if so, was he murdered? And can Poirot find out the answers without putting more lives in danger?

“Sophie Hannah’s third “New Hercule Poirot Mystery” proves to be most satisfying…faithful to its model in the essentials but flexible enough to allow for an animated plot and protagonist.” - Washington Post

“Another ingeniously deceptive puzzle…. The gratifying reveal is a neat variation on one of Christie’s own solutions and demonstrates Hannah’s facility at combining her own plotting gifts with another author’s creation.” - Publishers Weekly

“It’s safe to say Agatha Christie fans will rejoice that Poirot has returned, keener than ever to solve the case.” - San Francisco Book Review

“It’s easy to see why the Agatha Christie estate chose Ms. Hannah for the daunting task of chronicling Poirot’s continuing adventures. In her capable hands, Hercule Poirot lives and investigates as creatively and astutely as he ever has.” - CriminalElement.com

“A puzzle worthy of the skills of legendary detective Hercule Poirot.... Hannah once again nails the style and substance of her beloved predecessor, producing another treat for Christie fans.” - Booklist (starred review)

“The plot of this mystery is worthy of Agatha Christie’s fame. It is compelling and uses Hercule Poirot’s talents well to solve this most vexing of cases.” - Bookloons.com

“Hercule Poirot fans, rejoice! The fastidious Belgian detective with the amazing little gray cells and equally amazing moustache is back…. I had forgotten how enjoyable, and intricate, the plotting of a Poirot mystery is…. I loved it!” - Suspense Magazine

“A thoroughly enjoyable tale from start to finish. Poirot … is in fine hands with author Sophie Hannah.” - RedCarpetCrash.com

“As tricky as anything written by Agatha Christie.... Poirot is back.” - Alexander McCall Smith, New York Times bestselling author of The No. 1 Ladies’ Detective Agency

“Classic Christie . . . Captures the essence of the originals without being a slavish imitation . . . Clues emerge, but the case remains perplexing. Christie aficionados will delight in the familiar repartee and the intricate deduction of the solution.” - Washington Post

Sophie Hannah is an internationally bestselling crime fiction writer. Her crime novels have been translated into 34 languages and published in 51 countries. Her psychological thriller The Carrier won the Specsavers National Book Award for Crime Thriller of the Year in 2013. In 2014 and 2016, Sophie published The Monogram Murders and Closed Casket, the first new Hercule Poirot mysteries since Agatha Christie's death, both of which were national and international bestsellers.Sophie is an Honorary Fellow of Lucy Cavendish College, Cambridge.
Agatha Christie is the most widely published author of all time, outsold only by the Bible and Shakespeare. Her books have sold more than a billion copies in English and another billion in more than a hundred foreign languages. Her phenomenal career spanned six decades, until her death in 1976.