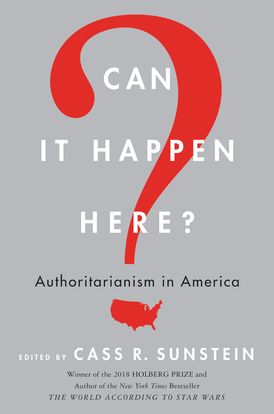 “What makes Trump immune is that he is not a president within the context of a healthy Republican government. He is a cult leader of a movement that has taken over a political party – and he specifically campaigned on a platform of one-man rule. This fact permeates “Can It Happen Here? . . . which concludes, if you read between the lines, that “it” already has.” – New York Times Book Review

From New York Times bestselling author Cass R. Sunstein, a compelling collection of essays by the brightest minds in America on authoritarianism.

With the election of Donald J. Trump, many people on both the left and right feared that America’s 240-year-old grand experiment in democracy was coming to an end, and that Sinclair Lewis’ satirical novel, It Can’t Happen Here, written during the dark days of the 1930s, could finally be coming true. Is the democratic freedom that the United States symbolizes really secure? Can authoritarianism happen in America?

Acclaimed legal scholar, Harvard Professor, and New York Times bestselling author Cass R. Sunstein queried a number of the nation’s leading thinkers. In this thought-provoking collection of essays, these distinguished thinkers and theorists explore the lessons of history, how democracies crumble, how propaganda works, and the role of the media, courts, elections, and "fake news" in the modern political landscape—and what the future of the United States may hold.

“[Trump] is a cult leader of a movement that has taken over a political party – and he specifically campaigned on a platform of one-man rule. This fact permeates Can It Happen Here? . . . which concludes, if you read between the lines, that “it” already has.” — New York Times Book Review

“Sunstein gathers together 17 provocative, topical essays...[that] rouse the reader to think carefully and deeply about the prospects for American authoritarianism.” — Publishers Weekly

“Sunstein, for his part, takes a clear-eyed view of the threats to democratic structures…  Can it Happen Here? seeks to investigate the questions raised by Lewis in the modern context” — The Progressive

“Several of the contributors — mainly law professors, with some diplomats, economists and psychologists tossed in — agree that American politics is susceptible to creeping authoritarianism and provide the intellectual underpinning.” — Washington Post

“These essays are serious and thought-provoking.” — Pittsburg Post-Gazette

“A renowned legal scholar assembles a dream team of other legal authorities and cultural and political analysists to ponder the title, substance, and current relevance of It Can’t Happen Here...Cautionary pieces well-informed by history, legal theory, and patriotism, all bubbling in a cauldron of anxiety.” — Kirkus

“Through these carefully sourced essays, readers will gain a framework in which to evaluate the hyperbolic rhetoric disseminated on so many platforms. And the topics covered here continue to ripple in the daily news out of Washington.” — Booklist

Cass R. Sunstein is the Robert Walmsley University Professor at Harvard, where he is founder and director of the Program on Behavioral Economics and Public Policy. He is the most cited law professor in the United States and probably the world. He has served as Administrator of the White House Office of Information and Regulatory Affairs and as a member of the President’s Review Group on Intelligence and Communications Technologies. He is the winner of the 2018 Holberg Prize. His many books include the bestseller Nudge: Improving Decisions about Health, Wealth, and Happiness (with Richard H. Thaler), Simpler: The Future of Government, and Republic.com. A frequent adviser to governments all over the world and a columnist for Bloomberg View, he is married to the United States Ambassador to the United Nations, Samantha Power.

Other Works by Cass R. Sunstein