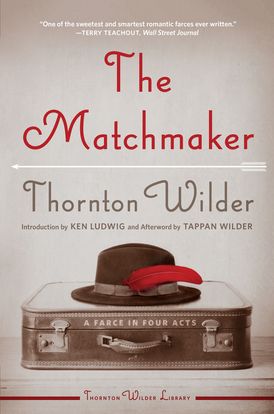 Now, for the first time in a standalone edition, Thornton Wilder's brilliant, hilarious play which was adapted into the hit Broadway musical Hello, Dolly with an afterword by Wilder's nephew, Tappan Wilder.

Horace Vandergelder, a wealthy old merchant residing in Yonkers has decided it’s time to take a wife and hires a matchmaker. But Dolly Gallagher Levi is no ordinary matchmaker. She’s a force of nature, with a plan of her own. Levi soon becomes involved in the affairs of the hearts of all those around her—including Vandergelder’s niece, his store clerks, assorted young and lovely ladies, and the headwaiter at an expensive restaurant, where this swift farce inevitably runs headlong into hilarious complications. Indeed, after a series of slapstick situations involving mistaken identities, a secret rendezvous behind carefully placed screens, separated lovers, and a trip to night court—everyone involved eventually finds themselves paired with a perfect match.

A delightful, deliciously funny classic by Thornton Wilder, The Matchmaker is astonishingly modern and is sure to resonate with audiences and readers today.