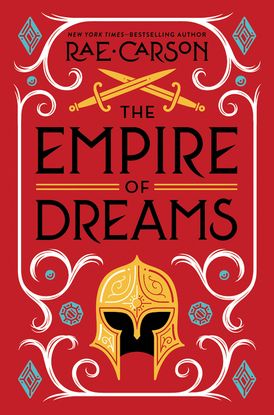 “Action, adventure, betrayal, and poison add up to a winner." —Booklist

New York Times–bestselling author Rae Carson makes a triumphant return to the world of her award-winning Girl of Fire and Thorns trilogy in this extraordinary stand-alone novel. Fans of Leigh Bardugo, Kendare Blake, and Tomi Adeyemi won’t want to put this book down.

Red Sparkle Stone is a foundling orphan with an odd name, a veiled past, and a mark of magic in her hair. But finally—after years and years of running, of fighting—she is about to be adopted into the royal family by Empress Elisa herself. She’ll have a home, a family. Sixteen-year-old Red can hardly believe her luck. Then, in a stunning political masterstroke, the empress’s greatest rival blocks the adoption, and everything Red has worked for crumbles before her eyes.

But Red is not about to let herself or the empress become a target again. Determined to prove her worth and protect her chosen family, she joins the Royal Guard, the world’s most elite fighting force. It’s no coincidence that someone wanted her to fail as a princess, though. Someone whose shadowy agenda puts everything—and everyone—she loves at risk. As danger closes in, it will be up to Red to save the empire. If she can survive recruitment year—something no woman has ever done before.

New York Times–bestselling author Rae Carson returns to the world of The Girl of Fire and Thorns in this action-packed fantasy-adventure starring an iconic heroine who fights for her family and her friends, and for a place where she will belong.

“Carson returns to her Girl of Fire and Thorns world. . . . This novel develops a taut, self-contained, political mystery within the confined quarters of the Guard and the palace, with a few chapters set in the past showing Red's harrowing, traumatic history. . . . A rewarding stand-alone novel with effortless plotting and deft characterizations.” - Kirkus Reviews

"Rousing . . . Red’s a strong, forthright, and feisty young woman . . . An exciting, satisfying read that will appeal to lovers of The Girl of Fire and Thorns." - School Library Journal

“Carson creates a worthy and sympathetic hero in Red . . . Action, adventure, betrayal, and poison add up to a winner of a companion novel to be read alongside or after the [Girl of Fire and Thorns] series.” - Booklist

“Set in the world of The Girl of Fire and Thorns, this engrossing fantasy follows two threads about protagonist Red. . . . Carson gives appropriate attention to the awkward moments encountered by the first female recruit in an elite fighting squad, but Red earns her place with talents and choices that will resonate with readers no matter their gender.” - Horn Book Magazine

“Red is a realistically complex heroine, and her journey to belonging and healing feels genuinely depicted. . . . Rendered with nuance and care.” - Publishers Weekly

"Fans will rejoice. . . . Carson effortlessly brings readers into her familiar, already well-developed world and its mangled politics, imparting a Tamora Pierce-esque flair to Red’s journey as she overcomes the obstacles that come with being an outsider." - Bulletin of the Center for Children’s Books

The Girl of Fire and Thorns Stories