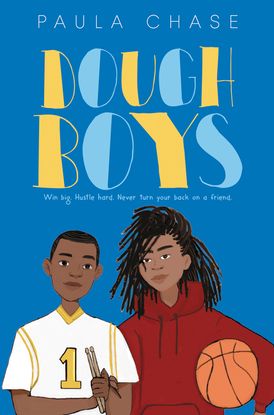 In the companion to her acclaimed So Done, Paula Chase follows best friends Simp and Rollie as their friendship is threatened by the pressures of basketball, upcoming auditions, middle school, and their growing involvement in the local drug ring.

Dough Boys is a memorably vivid story about the complex friendship between two African American boys whose lives are heading down very different paths. For fans of Jason Reynolds’s Ghost and Rebecca Stead’s Goodbye Stranger.

Deontae “Simp” Wright has big plans for his future. Plans that involve basketball, his best friend, Rollie, and making enough money to get his mom and four younger brothers out of the Cove, their low-income housing project.

Long term, this means the NBA. Short term, it means being a dough boy—getting paid to play lookout and eventually moving up the rungs of the neighborhood drug operation with Rollie as his partner.

Roland “Rollie” Matthews used to love playing basketball. He loved the rhythm of the game, how he came up with his best drumbeats after running up and down the court. But playing with the elite team comes with extra, illegal responsibilities, and Rollie isn't sure he's down for that life. The new talented-and-gifted program, where Rollie has a chance to audition for a real-life go-go band, seems like the perfect excuse to stop being a dough boy. But how can he abandon his best friend?

“In this follow-up to SO DONE, Paula Chase explores the unraveling friendship of two middle school boys, Rollie and Simp. This unsparing but tender novel takes the reader down some dangerous streets even as it reveals a hopeful world beyond. Chase’s writing pops off the page. I loved DOUGH BOYS!” - -Barbara Dee, Author of Everything I Know About You

“This companion novel to So Done features best friends Rollie Matthews and Simp Wright, whose middle-school basketball coach has begun grooming them to become drug lookout boys. . . . Fans . . . will love the various cameos of familiar characters, but there’s universal appeal . . . in this bittersweet look at friendship in the hood.” - Booklist

“[Chase] imbues her writing with style and phraseology that paint a vivid picture of this distinct world and the young Black teens who feel the weight of it upon their shoulders. Relatively hopeful endings for both boys . . . wrap up a smart and stirring take on growing up and apart.” - Bulletin of the Center for Children’s Books

“The definitions of bravery and commitment are put to the test for the middle-school duo, as the boys determine where their true loyalties lie. The alternating third-person narratives pull no punches linguistically. . . . Fans of Jason Reynolds and Angie Thomas will enjoy this rough and relatable read, whose conclusion provides no easy answers.” - Horn Book Magazine 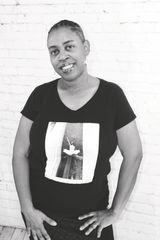 Paula Chase is the cofounder of The Brown Bookshelf, a site designed to increase awareness of African American voices writing for young readers. She lives in Annapolis, Maryland. Her novels include the acclaimed So Done and its companion, Dough Boys. www.paulachasehyman.com

Other Works by Paula Chase