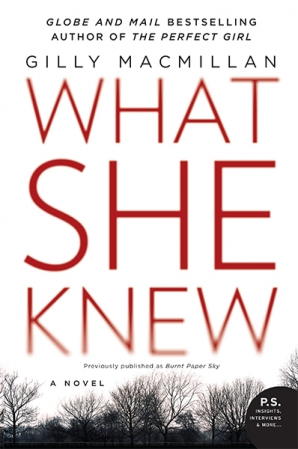 Rachel Jenner is walking in a Bristol park with her eight-year-old son, Ben, when he asks if he can run ahead. It’s an ordinary request on an ordinary Sunday afternoon, and Rachel has no reason to worry—until Ben vanishes.

Police are called, search parties go out, and Rachel, already insecure after her recent divorce, feels herself coming undone. As hours and then days pass without a sign of Ben, everyone who knew him is called into question, from Rachel’s newly married ex-husband to her mother-of-the-year sister. Inevitably, media attention focuses on Rachel too, and the public’s attitude toward her begins to shift from sympathy to suspicion.

As she desperately pieces together the threadbare clues, Rachel realizes that nothing is quite as she imagined it to be, not even her own judgment. And the greatest dangers may lie not in the anonymous strangers of every parent’s nightmares, but behind the familiar smiles of those she trusts the most.

“Every parent’s nightmare, handled with intelligence and sensitivity, the novel is also deceptively clever. I found myself racing through to find out what happened.” — Rosamund Lupton, international bestselling author of Sister

“One of the brightest debuts I have read this year - a visceral, emotionally charged story….heart-wrenchingly well told and expertly constructed, this deserves to stay on the bestseller list until Christmas” — The Daily Mail

“…a clever, dark, compulsive read… If you liked <em>All the Missing Girls</em> by Megan Miranda, you’ll also enjoy this one.” — Birmingham magazine

“If you like a good nail-biting, scary read...[t]his was a brilliant read!...This story is fast-paced, smart, technologically current, and every parent’s nightmare! If you enjoyed the film I did, Kidnap, you’ll love this addictive adventure.” — Halle Berry