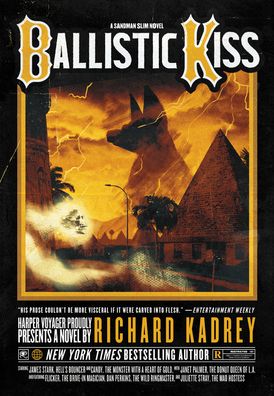 "I loved where Kadrey started with this series, but I love where he's going even more."-- NYT Bestselling author Cory Doctorow

Sandman Slim is back in Los Angeles and kicking more supernatural ass in this inventive, high-octane page-turner—the next to last volume in the popular and acclaimed fantasy adventure series from New York Times bestselling author Richard Kadrey.

As the battle between warring angels continues, James Stark is focused on seemingly simpler matters now that he’s resurfaced on earth: an invasion of ghosts. L.A.’s Little Cairo neighborhood has suddenly been overrun by violent spirits, and Thomas Abbott knows if anyone can figure out why they’ve appeared—and how to get rid of them—it’s Stark.

Armed with the Room of Thirteen Doors, Stark quickly learns that the answer may reach back to the 1970s and the unsolved murder of small-time actor, Chris Stein. As he begins to dig into the cold case, another area of Stark’s life takes an unexpected turn when he becomes entangled with Janet, a woman he saved during the High Plains Drifter zombie attack.

Janet’s brush with the living dead hasn’t quenched her thirst for danger. She’s an adrenaline junkie and a member of The Zero Lodge—a club that promises “there’s zero chance you’ll get out alive.” The Lodge attracts thrill seekers who flock to perilous events such as night walks through the LA Zoo—with its deadliest animals uncaged. Joining the lodge to be with Janet, Stark makes a pair of crucial discoveries that could decide the fate of LA and Heaven itself.

"The prose simmers with Kadrey’s characteristic blend of cynicism and absurdist humor, but the nuanced character development and exciting relationship-building make this feel like a brave new direction for the series. This addictive urban fantasy works in its own right—and sets things up for what promises to be one hell of a finale. - Publishers Weekly (starred review)

"As always, Slim’s humor and action are right at the forefront. Perfect for readers who like their urban fantasy just a little bit over the top, and those missing Jim Butcher's Dresden Files." - Booklist

“In the Sandman Slim novels the reader can feel the heat of L.A., smell the smog, taste the carnitas and tamales, and know the joy of finally sliding into the AC and onto that barstool at the end of a brutal, bloody hard day of searching, fighting, killing, and just plain old surviving.”  - New York Journal of Books

“If this is escapism, it’s the most masochistic kind I can imagine.”  - NPR Books

“I hope Kadrey keeps putting out Sandman Slim books for the next twenty years. They’re that much fun to read.”  - Wired

"I loved where Kadrey started with this series, but I love where he's going even more." - Cory Doctorow