Where the Watermelons Grow 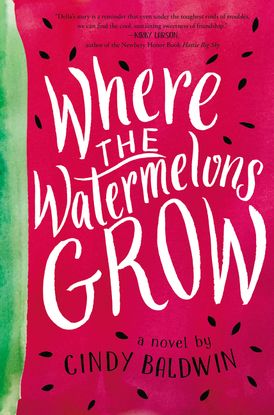 Where the Watermelons Grow

Fans of The Thing About Jellyfish and A Snicker of Magic will be swept away by Cindy Baldwin’s debut middle grade about a girl coming to terms with her mother’s mental illness. An Oregon Spirit Award Honor book.

When twelve-year-old Della Kelly finds her mother furiously digging black seeds from a watermelon in the middle of the night and talking to people who aren't there, Della worries that it’s happening again—that the sickness that put her mama in the hospital four years ago is back. That her mama is going to be hospitalized for months like she was last time.

With her daddy struggling to save the farm and her mama in denial about what’s happening, it’s up to Della to heal her mama for good. And she knows just how she’ll do it: with a jar of the Bee Lady’s magic honey, which has mended the wounds and woes of Maryville, North Carolina, for generations.

But when the Bee Lady says that the solution might have less to do with fixing Mama’s brain and more to do with healing her own heart, Della must learn that love means accepting her mama just as she is.

★ “Della’s voice will tug at readers’ heartstrings as she tries to hold her family together. Middle grade stories about mental illness, particularly those that focus on empathy and acceptance, are rare. This heartfelt story will stay with readers. A top choice.” - School Library Journal (starred review)

★ “Baldwin has written a heartbreaking, yet heartening, story that explores mental illness and its effects on an entire family. Readers will connect with the novel’s well-formed characters and be absorbed by the plot, which pulls no punches but doesn’t overwhelm.” - ALA Booklist (starred review)

★ “In her debut novel, Baldwin presents a realistic portrayal of life with a mentally ill parent.” - Publishers Weekly (starred review)

“[Della’s] first-person narration is realistically earthy without crossing into gritty. This debut novel gushes with Southern charm. This story’s as sweet as Della’s daddy’s watermelons but never saccharine.” - Kirkus Reviews

“This has a tenderness that will appeal to fans of DiCamillo’s Because of Winn-Dixie.” - Bulletin of the Center for Children’s Books

“Della’s story is a reminder that even under the toughest rinds of troubles we can find the cool, sustaining sweetness of friendship.” - Kirby Larson, author of the Newbery Honor Book Hattie Big Sky

“Where the Watermelons Grow takes a close look at the unpredictable and debilitating nature of schizophrenia. Baldwin writes with a genuine voice.” - Voice of Youth Advocates (VOYA)

“Where the Watermelons Grow is a spot-on, insightful novel about a preteen learning to live with and accept a parent’s mental illness.” - BookPage.com

Cindy Baldwin is a fiction writer, essayist, and poet. She grew up in North Carolina and still misses the sweet watermelons and warm accents on a daily basis. As a middle schooler, she kept a book under her bathroom sink to read over and over while fixing her hair or brushing her teeth, and she dreams of writing the kind of books readers can’t bear to be without. She lives in Portland, Oregon, with her husband and daughter, surrounded by tall trees and wild blackberries. Where the Watermelons Grow is her debut novel and is followed by Beginners Welcome. Learn more about Cindy at www.cindybaldwinbooks.com.

Other Works by Cindy Baldwin

The Berenstain Bears and the Ducklings

Berenstain Bears and the Ducklings

Higgledy Piggledy the Hen Who Loved to Dance

The Trouble with Chickens