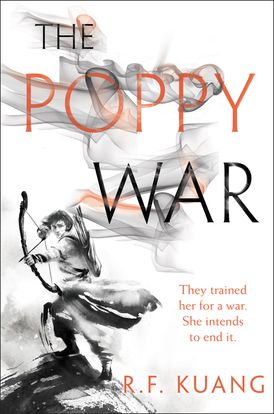 “I have no doubt this will end up being the best fantasy debut of the year [...] I have absolutely no doubt that [Kuang’s] name will be up there with the likes of Robin Hobb and N.K. Jemisin.” -- Booknest

A brilliantly imaginative talent makes her exciting debut with this epic historical military fantasy, inspired by the bloody history of China’s twentieth century and filled with treachery and magic, in the tradition of Ken Liu’s Grace of Kings and N.K. Jemisin’s Inheritance Trilogy.

When Rin aced the Keju—the Empire-wide test to find the most talented youth to learn at the Academies—it was a shock to everyone: to the test officials, who couldn’t believe a war orphan from Rooster Province could pass without cheating; to Rin’s guardians, who believed they’d finally be able to marry her off and further their criminal enterprise; and to Rin herself, who realized she was finally free of the servitude and despair that had made up her daily existence. That she got into Sinegard—the most elite military school in Nikan—was even more surprising.

Because being a dark-skinned peasant girl from the south is not an easy thing at Sinegard. Targeted from the outset by rival classmates for her color, poverty, and gender, Rin discovers she possesses a lethal, unearthly power—an aptitude for the nearly-mythical art of shamanism. Exploring the depths of her gift with the help of a seemingly insane teacher and psychoactive substances, Rin learns that gods long thought dead are very much alive—and that mastering control over those powers could mean more than just surviving school.

For while the Nikara Empire is at peace, the Federation of Mugen still lurks across a narrow sea. The militarily advanced Federation occupied Nikan for decades after the First Poppy War, and only barely lost the continent in the Second. And while most of the people are complacent to go about their lives, a few are aware that a Third Poppy War is just a spark away . . .

Rin’s shamanic powers may be the only way to save her people. But as she finds out more about the god that has chosen her, the vengeful Phoenix, she fears that winning the war may cost her humanity . . . and that it may already be too late.

“I have no doubt this will end up being the best fantasy debut of the year [...] I have absolutely no doubt that [Kuang’s] name will be up there with the likes of Robin Hobb and N.K. Jemisin.” - Booknest

“The “year’s best debut” buzz around this one was warranted; it really is that good.” - B&N Sci-fi and Fantasy Blog

“A thrilling, action-packed fantasy of gods and mythology...The ambitious heroine’s rise from poverty to ruthless military commander makes for a gripping read, and I eagerly await the next installment.” - Julie C. Dao, author of Forest of a Thousand Lanterns

“A blistering, powerful epic of war and revenge that will captivate you to the bitter end.” - Kameron Hurley, author of The Stars are Legion

“In The Poppy War, RF Kuang draws on history and myth to tell a relentlessly unforgiving story of war, vengeance, power and madness, with larger-than-life characters that evoke sympathy and rouse terror. Brace yourself.” - Fonda Lee, award-winning author of The Green Bone Saga

“An original and engrossing tale of the coming of age of a talented young soldier amid the horrors of invasion and genocide.” - Anna Stephens, author of Godblind

“Debut novelist Kuang creates an ambitious fantasy reimagining of Asian history populated by martial artists, philosopher-generals, and gods [...] This is a strong and dramatic launch to Kuang’s career.” - Publishers Weekly

“The narrative is an impactful, impressive symphony of words that grant life to this incredible morality tale. Setting the stage for an epic fantasy is an understandably enormous undertaking, but Kuang does an exceptional job of world and character building.” - RT Book Reviews (4 1/2 stars, Top Pick!)

“The book starts as an epic bildungsroman, and just when you think it can’t get any darker, it does [...] Kuang pulls from East Asian history, including the brutality of the Second Sino-Japanese war, to weave a wholly unique experience.” - Washington Post

“[The Poppy War is] strikingly grim military fantasy that summons readers into an East Asian–-inspired world of battles, opium, gods, and monsters. Fans of Ken Liu’s The Grace of Kings will snap this one up.” - Library Journal (starred review)

“This looks like a good match for readers of Red Rising.” - Omnivoracious (10 Highly Anticipated New Science Fiction and Fantasy Books)

“The Poppy War is a masterful piece of fiction.” -  S. Qiouyi Lu for the B&N Sci-fi & Fantasy Blog

“A young woman’s determination and drive to succeed and excel at any cost runs into the horrors of war, conflict and ancient, suppressed forces in R. F. Kuang’s  excellent debut novel, The Poppy War.” - The Skiffy and Fanty Show

“Kuang ambitiously begins a trilogy that doesn’t shy away from the darkest sides of her characters, wrapped in a confectionery of high-fantasy pulp. [...] The future of Rin in this world may appear quite dark, but that of the series seems bright indeed.” - New York Daily News

“A complex, sprawling, ambitious novel, part coming of age and part tragedy of power, that uses motifs and influences from the 20th century. It reminds me tonally of Lara Elena Donnelly’s Amberlough and Joe Abercrombie’s Half a King, [and] in setting of K. Arsenault Rivera’s The Tiger’s Daughter.” - Tor.com

“A complex, challenging, and incredibly ambitious novel.” - Vulture (The 10 Best Sci-Fi and Fantasy Books of 2018)

“If you have read and enjoyed George R.R. Martin’s A Song of Ice and Fire, or Sabah Tahir’s An Ember in the Ashes then you are likely to enjoy this.” - Sammy’s Shelf

“I can safely say that this will be the finest debut of 2018 and I’d be surprised if it isn’t one of the top 3 books of the year full stop. Spectacular, masterclass, brilliant, awesome [...] Simply put, R.F. Kuang’s “The Poppy War” is a towering achievement of modern fantasy.” - Fantasy Book Review

“This isn’t just another magical, fantasy world with artificially fabricated stakes. Rin’s journey and the war against the Federation feel incredibly urgent and powerful [...] R.F. Kuang is one of the most exciting new authors I’ve had the privilege of reading.” - The Roarbots

“[THE POPPY WAR] feels entirely immersive and rich in a way that kind of sucks you in [...] It’s a treasure trove.” - Utopia State of Mind

“The Poppy War was a fun, engrossing, journey to a world I wish I could visit and a school I wish I could attend. With its strong characters, interesting world building, and intriguing plot it is a great read that I would recommend to anyone.” - The Quill to Live

“The book kicks arse, and I couldn’t put it down. It’s a cracking debut, and one I recommend without reservation.” - Sci-Fi and Fantasy Reviews

“This novel has already rocketed up to the top of my list of favorite fantasy reads of all time. It was everything I wanted and more.” - The BiblioSanctum

R.F. Kuang studies modern Chinese history. She has a BA from Georgetown University and is currently a graduate student in the United Kingdom on a Marshall Scholarship. The Poppy War is her debut novel.