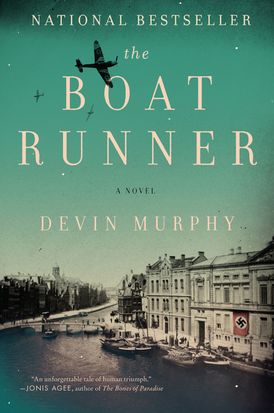 In the tradition of All The Light We Cannot See and The Nightingale, comes an incandescent debut novel about a young Dutch man who comes of age during the perilousness of World War II.

Beginning in the summer of 1939, fourteen-year-old Jacob Koopman and his older brother, Edwin, enjoy lives of prosperity and quiet contentment. Many of the residents in their small Dutch town have some connection to the Koopman lightbulb factory, and the locals hold the family in high esteem.

On days when they aren’t playing with friends, Jacob and Edwin help their Uncle Martin on his fishing boat in the North Sea, where German ships have become a common sight. But conflict still seems unthinkable, even as the boys’ father naively sends his sons to a Hitler Youth Camp in an effort to secure German business for the factory.

When war breaks out, Jacob’s world is thrown into chaos. The Boat Runner follows Jacob over the course of four years, through the forests of France, the stormy beaches of England, and deep within the secret missions of the German Navy, where he is confronted with the moral dilemma that will change his life—and his life’s mission—forever.

Epic in scope and featuring a thrilling narrative with precise, elegant language, The Boat Runner tells the little-known story of the young Dutch boys who were thrown into the Nazi campaign, as well as the brave boatmen who risked everything to give Jewish refugees safe passage to land abroad. Through one boy’s harrowing tale of personal redemption, here is a novel about the power of people’s stories and voices to shine light through our darkest days, until only love prevails.

“An ambitious coming of age story...Murphy’s debut novel is a purposely limited view of war, as was The Red Badge of Courage, but strong characters and compelling narrative convey the impact well beyond one family. An impressive debut.” - Kirkus Reviews (starred review)

“A stellar account of wartime sacrifice, loss, and suspense…Jacob’s final salvation is satisfying and inspiring. As one character says, ‘It’s the incidents we can’t control that make us who we are.’” - Publishers Weekly

“[A] stellar account of sacrifice, loss and survival.” - Eyes on World Culture

“Murphy’s novel is successful not only for its visceral depiction of Europe at war but also as a study in character, limning Jacob’s growth to a self-sufficient, empathetic adult.” - Booklist

“Debut novelist Murphy lends authenticity to his story by drawing on the life of his Dutch maternal grandfather and his own experiences at sea, where Jacob crucially spends time...An effectively detailed, morally complex book that will appeal to all readers of historical fiction.” - Library Journal

“Murphy is a rare writer whose prose rings with authority and beauty as it weaves the devastating story of children coming of age in the darkest hours of the twentieth century. Every page is alive with discovery, surprise, and ultimately, the mystery of what drives the human heart. The electricity which sets this story on its journey continues to crackle and spark long after the lights begin to go out across Europe, one after another, until we finally understand the cost and meaning of resistance, our only weapon against the tyranny that threatens to destroy civilization. This is an unforgettable tale of human triumph.” - Jonis Agee, author of The Bones of Paradise

“Devin Murphy’s The Boat Runner is staggering. An epic and unknown story of World War II, it lays bare the moral impossibilities families face when bombs begin to fall. Masterful prose pairs with an uncommon sense for emotional complexity-here, Murphy renders both exploding warships and the deepest quandaries of the human heart with equal grace, with equal force. In The Boat Runner, Devin Murphy has given us a much-needed tale of redemption in dark times. Its truths will be with me for a long while.” - Nicholas Mainieri, author of The Infinite

“Devin Murphy’s fantastic debut novel The Boat Runner is a lot of things—thrilling, tragic, well-paced—but maybe most of all, timely. With prose reminiscent of Per Petterson, The Boat Runner is a book that asks its reader, When does a person stand up? When does a normal person take action? And how does a person resist against overwhelming power? The Boat Runner is a satisfying page-turner, sure, but it is also an allegory for our time, a reminder of world war not so long ago, when fishermen, factory owners, children, and mothers became reluctant heroes, standing bravely against a sudden and twisted evil.” - Nickolas Butler, internationally best-selling author of SHOTGUN LOVESONGS and THE HEARTS OF MEN

“Poignant…acts as a cautionary tale for our own times….The young Dutch boy Jacob Koopman, together with his family, lives in the middle of a morality tale, in which doing the right thing is often obscured by the need to survive. Devin Murphy has given us a moving, powerful and important work.” - Joseph Kertes, author of The Afterlife of Stars and Gratitude, winner of the National Jewish Book Award for Fiction 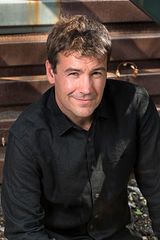 Devin Murphy is the nationally bestselling author of The Boat Runner. His fiction has appeared in more than sixty literary journals and anthologies, including The Missouri Review, Glimmer Train, and Confrontation. He is an Associate Professor at Bradley University and lives in Chicago with his wife and kids.

Other Works by Devin Murphy