The Language of Fire 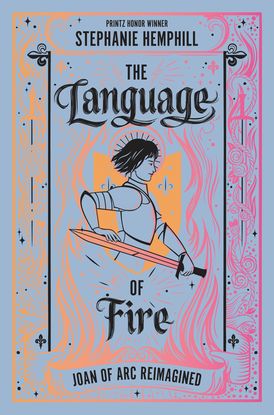 The Language of Fire

The Language of Fire is a lyrical, dark, and moving look at the life of Joan of Arc, who as a teen girl in the fifteenth century commanded an army and helped crown a king of France.

This extraordinary verse novel from award-winning author Stephanie Hemphill dares to imagine how an ordinary girl became a great leader, and ultimately saved a nation.

Jehanne was an illiterate peasant, never quite at home among her siblings and peers. Until one day, she hears a voice call to her, telling her she is destined for important things. She begins to understand that she has been called by God, chosen for a higher purpose—to save France.

Through sheer determination and incredible courage, Jehanne becomes the unlikeliest of heroes. She runs away from home, dresses in men’s clothes, and convinces an army that she will lead France to victory.

As a girl in a man’s world, at a time when women truly had no power, Jehanne faced constant threats and violence from the men around her. Despite the impossible odds, Jehanne became a fearless warrior who has inspired generations.

“It’s not easy to both tell a story and explain history, but Hemphill does both beautifully. The writing is often poetic with images that linger…. A moving and in many ways motivating experience.” - ALA Booklist (starred review)

“[An] engrossing first-person, present-tense verse novel… [that] humanizes [Joan of Arc] and makes her a sympathetic and relatable figure, even over six hundred years later.” - Horn Book (starred review)

Praise for HIDEOUS LOVE: “A . . . riveting portrait of the artist as a young woman.” - Kirkus Reviews

Praise for HIDEOUS LOVE: “This present-tense novel in verse provides an intimate glimpse into Mary’s life…Readers will identify the parallels between the creation of a monster and the creation of her famous book. ” - School Library Journal

Praise for HIDEOUS LOVE: “An ideal companion piece for teens studying the original classic…Hemphill, author of the Printz Honor Book Your Own, Sylvia (2007), manages to plumb from it her own vein of riches.” - Booklist

Praise for WICKED GIRLS: “An excellent supplementary choice for curricular studies of Arthur Miller’s The Crucible, this will also find readers outside the classroom, who will savor the accessible, unsettling, piercing lines that connect past and present with timeless conflict and truths.” - Booklist (starred review)

Praise for WICKED GIRLS: “An atmospheric tale.” - Bulletin of the Center for Children’s Books

Stephanie Hemphill is the award-winning author of Hideous Love: The Story of the Girl Who Wrote Frankenstein; Wicked Girls: A Novel of the Salem Witch Trials, a Los Angeles Times Book Prize finalist; Your Own, Sylvia: A Verse Portrait of Sylvia Plath, a Michael L. Printz Honor Book; Sisters of Glass; and Things Left Unsaid: A Novel in Poems. She lives in Chicago, Illinois.

Other Works by Stephanie Hemphill