Theordore Roosevelt, His Cowboy Regiment, and the Immortal Charge Up San Juan Hill 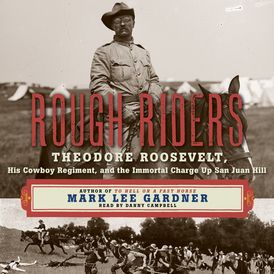 Theordore Roosevelt, His Cowboy Regiment, and the Immortal Charge Up San Juan Hill

THE AWARD-WINNING, NEW DEFINITIVE HISTORY OF TEDDY ROOSEVELT AND THE ROUGH RIDERS

The now-legendary Rough Riders were a volunteer regiment recruited in 1898 to help drive the Spaniards out of Cuba. Drawn from America’s southwestern territories and led by the irrepressible Theodore Roosevelt, these men included not only cowboys and other Westerners, but also several Ivy Leaguers and clubmen, many of them friends of “TR.” Roosevelt and his men quickly came to symbolize American ruggedness, daring, and individualism. He led them to victory in the famed Battle of San Juan Hill, which made TR a national hero and cemented the Rough Riders’ iconic place in history.