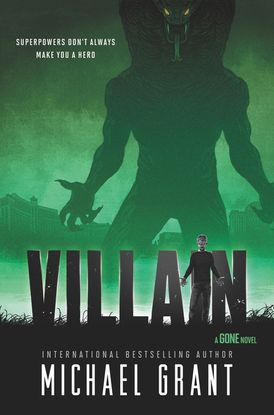 It’s been four years since the events of GONE. The Perdido Beach dome is down, but the horrors within have spread. The alien virus-infested rock that created the FAYZ is creating monsters—monsters that walk the cities and countryside, terrorizing all.

There are tanks in the street and predator drones in the sky, doomed efforts to stop the disintegration of civilization. Into this chaos comes a villain with the power to control anyone with just the sound of his voice. Dillon Poe wanted to be a comedian once . . . but everyone made fun of him. Dillon the loser. Dillon the freak. Now he’s sending thousands to their death. Who’s laughing now?

The only people who can stop a superpowered villain are superpowered heroes. Dekka, Shade, Cruz, Malik, Armo, and a new mutant with unmatched powers, are all that stand in Dillon’s way. But when the lines begin to blur between hero and villain—some begin to wonder who’s really the monster.

“Ratchets up the gore and action, and features a diverse cast of characters. An evocative, intricately plotted companion series.” –ALA Booklist

“Grant has a clear trajectory for this series, which is slowly ramping up to something more epic than anything we’ve seen. Fans will relish the familiar faces, high-octane action, and, of course, the carnage.” — Booklist

Praise for MONSTER: “Fans of this very popular series will no doubt clamor for this most recent addition.” — School Library Journal

“New characters and old favorites abound in this follow-up. The cast is fairly diverse, covering a wide variety of skin colors, sexual orientations, and gender identities. Longtime fans will surely be excited by the novel’s final moments. A bombastic, engaging start to a sequel series full of potential.” — Kirkus Reviews

“Grant’s modern take on the Dr. Jekyll and Mr. Hyde narrative ratchets up the gore and action, and features a diverse cast of characters...[An] evocative, intricately plotted companion series that delves into similar issues of bioethics and gray areas of morality.” — Booklist

Praise for GONE: ”This intense, marvelously plotted, paced, and characterized story will immediately garner comparisons to Lord of the Flies or even the long-playing world shifts of Stephen King, with just a dash of X-Men for good measure.” — Booklist (starred review)

Praise for HUNGER: “The tension starts in the first chapter and does not let up until the end The story is prgressing with smart plot twists, both in actions and emotions.” — Voice of Youth Advocates (VOYA) (starred review)

Praise for PLAGUE: “Grant’s science fantasy thrillers continue to be the very definition of a page-turner.” — Booklist

Praise for LIGHT: “As a series finale, this book is more than satisfying-it is epic.”
— Voice of Youth Advocates (VOYA) (starred review)