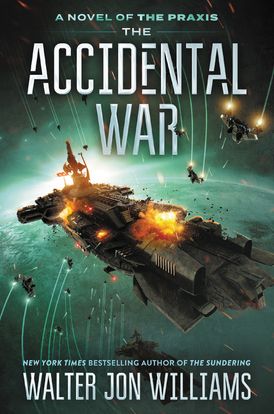 Blending fast-paced military science fiction and space opera, the first volume in a dynamic trilogy from the New York Times bestselling author of The Praxis, set in the universe of his popular and critically acclaimed Dread Empire’s Fall series—a tale of blood, courage, adventure and battle in which the fate of an empire rests in the hands of a cadre of desperate exiles.

It’s been seven years since the end of the Naxid War. Sidelined for their unorthodox tactics by a rigid, tradition-bound military establishment, Captain Gareth Martinez and Captain the Lady Sula are stewing in exile, frustrated and impatient to exercise the effective and lethal skills they were born to use in fighting the enemy.

Yet after the ramshackle empire left by the Shaa conquerors is shaken by a series of hammer blows that threaten the foundations of the commonwealth, the result is a war that no one planned, no one expected, and no one knows how to end.

Now, Martinez, Sula, and their confederate Nikki Severin must escape the clutches of their enemies, rally the disorganized elements of the fleet, and somehow restore the fragile peace—or face annihilation at the hands of a vastly superior force.

“Walter Jon Williams is one of my favorite writers in the genre, with great ideas, worldbuilding, characters, and always a captivating story.” — Kevin J. Anderson, New York Times bestselling author of The Saga of Seven Suns

“Williams is consummate writer. His worldbuilding continues excellent, his characterization is solid and believable, and his attention to detail while juggling a complex story of intrigue and financial disaster is deeply, impressive. Well-paced, tense, and deeply compelling, The Accidental War is a very entertaining work.” — Tor.com