How One Editor Transformed American Religion a Book at a Time 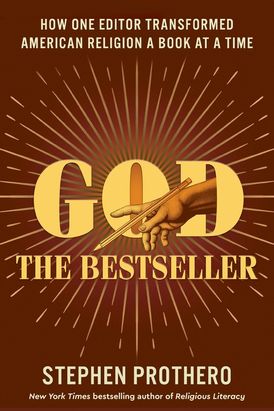 How One Editor Transformed American Religion a Book at a Time

New York Times bestselling author and acclaimed religion scholar, Stephen Prothero, captures the compelling and unique saga of twentieth-century America on an identity quest through the eyes and books of one of the most influential editors of the day—a search, born of two world wars, for resolution of our divided identity as a Christian nation and a nation of religions.

One summer evening in 1916 in Blanchester, Ohio, a sixteen-year-old farm boy was riding his horse past the town cemetery. The horse reared back and whinnied, and Eugene Exman saw God. For the rest of his life, he struggled to recreate that moment. Through a treasure of personal letters and papers, God, the Bestseller explores Exman’s personal quest. A journey that would lead him in the late 1920s to the Harper religious books department, which he turned during the Great Depression into a money-making juggernaut and the country’s top religion publisher.

Exman’s role in the shaping of American religion is undeniable. Here was a man who was ahead of his time and leading the rest of the nation through books on a spiritual exploration. Exman published bestsellers by the controversial preacher Harry Emerson Fosdick, the Catholic radical Dorothy Day, the Civil Rights pioneer Howard Thurman, and two Nobel laureates: Albert Schweitzer and Martin Luther King Jr. Exman did not just sit at a desk and read. In addition to his lifelong relationships with the most influential leaders of the day, Exman was on a spiritual journey of his own traversing the world in search of God. He founded a club of mystics, dropped acid in 1958, four years before Timothy Leary. And six years before The Beatles went to India, he found a guru there in 1962.

In the end, this is the story of the popularization of the religion of experience—a cultural story of modern America on a quest of its own. Exman helped to reimagine and remake American religion, turning the United States into a place where denominational boundaries are blurred, diversity is valued, and the only creed is that individual spiritual experience is the essence of religion.

This is a major book that fills a huge hole in our understanding of the 20th century development of the idea that “all religions are one.” The discovery of the papers of Eugene Exman has enabled Prothero to establish how Exman, as publisher and spiritual seeker, cultivated a network of like-minded writers whose books promoted a claim that fundamentally reshaped the popular understanding of religion in the U.S. and beyond. — Ann Taves, Distinguished Professor (Emerita), Department of Religious Studies, University of California at Santa Barbara