Book Two of the Khorasan Archives 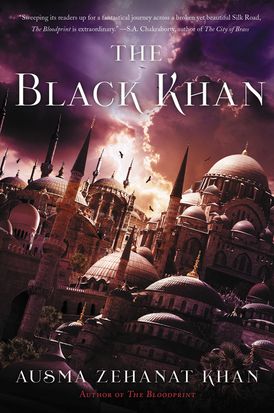 Book Two of the Khorasan Archives

Khan has created a rich, well-crafted world that will appeal to readers of S.A. Chakraborty’s The City of Brass (2017) or Erika Johansen’s The Queen of the Tearling  -- Booklist

The second novel in Ausma Zehanat Khan’s powerful epic fantasy quartet, a series that lies "somewhere between N. K. Jemisin and George R. R. Martin" (Saladin Ahmed), in which a powerful band of women must use their magic to defeat an oppressive dark regime.

To fight against the cruel and superstitious patriarchy known as the Talisman, members of the resistance group known as the Companions of Hira have risked their lives in a failed attempt to procure the Bloodprint—a dangerous text that may hold the secret to overthrowing the terrifying regime. Now, with their plans in ashes, the Companions of Hira have scattered, and the lives of two brave women at the center of the plot—Arian and Sinnia—face unprecedented danger.

Yet a spark of hope flickers in the darkness—the Bloodprint has survived. It is hidden in Ashfall, the seat of Rukh, the Black Khan, whose court is ruled by intrigue and conspiracy. Treacherous enemies ruthlessly maneuver for power behind the throne, including the autocratic Grand Vizier; the deadly and secretive Assassin; the Khan’s deposed half-brother; and the commander of Ashfall’s army, who is also Rukh’s oldest friend.

The Companions of Hira must somehow reunite, break through Talisman lines, and infiltrate Ashfall. A master of treachery himself, the Black Khan joins forces with these powerful women to manipulate them for his own ends. But as Ashfall comes under siege, he is forced to make a deadly calculation . . . one that could cause irrevocable damage to the Companions and their fight for freedom.

“Khan has created a rich, well-crafted world that will appeal to readers of S.A. Chakraborty’s The City of Brass or Erika Johansen’s The Queen of the Tearling.” — Booklist

“Khan draws on her Muslim heritage and Middle Eastern history to root her dark fantasy in distressingly believable realities, and avoids the middle book slump by ramping up complex plot twists, character betrayals, and other surprises with a crime-writer’s aplomb.” — B&N Sci-fi and Fantasy Blog (Best of October 2018)

Ausma Zehanat Khan holds a Ph.D. in International Human Rights Law with a specialization in military intervention and war crimes in the Balkans. She is a former adjunct law professor and was Editor-in-Chief of Muslim Girl magazine, the first magazine targeted to young Muslim women, and is the award-winning author of The Unquiet Dead and The Bloodprint, the first book in the Khorasan Archives. A British-born Canadian, Khan now lives near Denver, Colorado, with her husband.