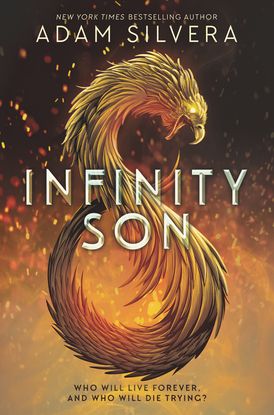 Balancing epic and intensely personal stakes, bestselling author Adam Silvera's Infinity Son is a gritty, fast-paced adventure about two brothers caught up in a magical war generations in the making.

Growing up in New York, brothers Emil and Brighton always idolized the Spell Walkers—a vigilante group sworn to rid the world of specters. While the Spell Walkers and other celestials are born with powers, specters take them, violently stealing the essence of endangered magical creatures.

Brighton wishes he had a power so he could join the fray. Emil just wants the fighting to stop. The cycle of violence has taken a toll, making it harder for anyone with a power to live peacefully and openly. In this climate of fear, a gang of specters has been growing bolder by the day.

Then, in a brawl after a protest, Emil manifests a power of his own—one that puts him right at the heart of the conflict and sets him up to be the heroic Spell Walker Brighton always wanted to be.

Brotherhood, love, and loyalty will be put to the test, and no one will escape the fight unscathed.

“With its raw, complex characters, Silvera's latest packs his signature high-stakes emotionalism alongside a politically charged premise. A bright spark of a promising series.” - Kirkus Reviews

“Silvera has created an exciting fantasy series opener. Fans of Cassandra Clare…will love this magical book that embodies it all.” - School Library Journal

"With Infinity Son, Adam Silvera has created an immersive, mind-bending world built around a sibling relationship that is both thoughtful and heart-wrenching." - Sabaa Tahir, #1 New York Times bestselling author of An Ember in the Ashes

"Adam Silvera has crafted an urban fantasy so intricate, so woven into our hyperconnected modern world and everyday issues, you'll swear the Spell Walkers of New York are real. A magical joyride with a cast full of heart."