When I Wake Up 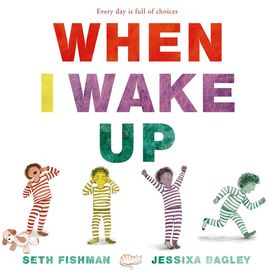 When I Wake Up

Every single day holds so many possibilities—how do you choose what to do when you wake up? Award-winning author Seth Fishman and acclaimed illustrator Jessixa Bagley introduce a young child and four different paths for their day in this inventive and original picture book that recognizes the imagination, courage, and independence of every child.

When an imaginative young child wakes up before their parents, they know that they’re supposed to stay in bed until the clock says 7:00. But that’s no fun—so what should they do instead? Make breakfast? Build a city? Ride a scooter? Dig in the garden?

Each choice leads to a different path for the day. And in the end, the child makes the best decision of all—to curl up, safe and loved, between Mom and Dad.

When I Wake Up begins in black-and-white, and then each of the child’s four choices is rendered in a different color. Every spread includes all four choices, so readers can enjoy this book traditionally, reading all four colors at once, or they can choose one color to follow from beginning to end.

Jessixa Bagley’s masterful and ingenious artwork beautifully complements Seth Fishman’s lyrical text that celebrates imagination, creativity, independence, and love. When I Wake Up begs to be read over and over again—and can change every time. Both children and parents will enjoy sharing this timeless story—no matter when they wake up or what time the clock says.

“A child is the first in the house to wake up and ponders what to make of the day . . . In a nod to choose-your-own-adventure types of books . . . subsequent spreads include four separate vignettes, representing the child’s options and rendered via Bagley’s expressive, detailed watercolors. . . . Each is awash in its own color so that readers can easily follow with page-turns . . . An adventurous tribute to the imagination of children and a day’s endless opportunities.” — Horn Book (starred review)

“In the morning, a child wakes before sunrise—and their still-sleeping parents. But rather than waiting for them to get up, the child thinks, ‘Maybe I will do whatever I want to do,’ and ponders the possibilities. Color-coded scenarios appear alongside each other for the bulk of the book, as the child describes how each chosen path might progress. . . . Charming, richly detailed watercolor-and-pencil illustrations of the child’s surroundings and experiences judiciously employ color and perspective in this cleverly told story. . . . [An] artful, engaging portrayal of a child’s imagination and view of their world.” — Booklist (starred review)

“[A] child in striped pajamas knows they’re not supposed to disturb their sleeping parents until 7 a.m. They dream up four possibilities to occupy the time . . . with each highly imaginative reverie rendered in different color. . . . Art from all four story lines appears simultaneously (part of the fun is seeing the different ways each spread’s real estate is divvied up), inviting comparisons and sage considerations of the child’s options. . . . Readers should come away admiring their mischievousness, creativity, independence, and curiosity.” — Publishers Weekly 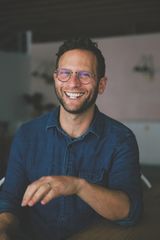 Seth Fishman is the author of A Hundred Billion Trillion Stars, a Boston Globe–Horn Book Award Honor book and winner of the Mathical Prize, as well as Power Up and The Ocean in Your Bathtub, all illustrated by Isabel Greenberg. He lives with his family in Los Angeles, California.

Other Works by Seth Fishman

Jessixa Bagley is the author and illustrator of many acclaimed books for children, including Boats for Papa, which received a Golden Kite Award, and Laundry Day, which received an Ezra Jack Keats Award Honor. She lives with her family in Seattle, Washington.

Other Works by Jessixa Bagley

The Ocean in Your Bathtub