The Wild Story of a Math Genius, a Gang of Backstabbing Bankers, and One of the Greatest Scams in Financial History 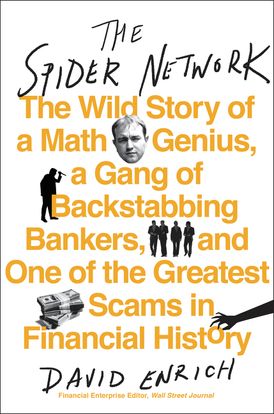 The Wild Story of a Math Genius, a Gang of Backstabbing Bankers, and One of the Greatest Scams in Financial History

The Wall Street Journal's award-winning business reporter unveils the bizarre and sinister story of how a math genius named Tom Hayes, a handful of outrageous confederates, and a deeply corrupt banking system ignited one of the greatest financial scandals in history.

In 2006, an oddball group of bankers, traders and brokers from some of the world's largest financial institutions made a startling realization: Libor—the London interbank offered rate, which determines the interest rates on trillions in loans worldwide—was set daily by a small group of easily manipulated functionaries, and that they could reap huge profits by nudging it to suit their trading portfolios. Tom Hayes, a brilliant but troubled mathematician, became the lynchpin of a wild alliance that among others included a French trader nicknamed “Gollum"; the broker “Abbo," who liked to publicly strip naked when drinking; a Kazakh chicken farmer turned something short of financial whiz kid; a broker known as “Village" (short for “Village Idiot") and fascinated with human-animal sex; an executive called “Clumpy" because of his patchwork hair loss; and a broker uncreatively nicknamed “Big Nose." Eventually known as the “Spider Network," Hayes's circle generated untold riches —until it all unraveled in spectacularly vicious, backstabbing fashion.

The Spider Network is not only a rollicking account of the scam, but a provocative examination of a financial system that was crooked throughout, designed to promote envelope-pushing behavior while shielding higher-ups from the consequences of their subordinates' rapacious actions.

“[Enrich’s] impressive reporting and writing chops are on full display in The Spider Network… From the start, the book reads like a fast-paced John le Carré thriller, and never lets up.” - William D. Cohan, New York Times Book Review

“With an unerring eye for detail, Enrich shows in this masterful work how a toxic stew of greed, arrogance and a lust for power led to a criminal scheme of unparalleled dimensions. It should be required reading for anyone who wants to understand the dirty underbelly of the financial world.” - Kurt Eichenwald, Pulitzer Prize winning author of The Informant

“A damning look at the culture of trader chicanery… Enrich has sidestepped the temptation to slip into author-as-prosecutor mode, instead going the wry tour guide route to lucidly (and often hilariously) usher readers through the Looney Tunes world that wrought l’affaire Libor.” - John Helyar, coauthor of Barbarians at the Gate

“David Enrich is a masterful financial story teller using real time communications from the central figures. He weaves into his narrative not only what happened, but how it happened and why. Michael Lewis has a new rival.” - Sheila Bair, former chair of the FDIC and bestselling author of Bull by the Horns

“An absorbing read that provides both a meticulous dissection of an immense scandal as well as a fascinating human story.” - Bethany McLean, author of The Smartest Guys in the Room and All the Devils Are Here

“Dare I say it, but The Spider Network will snare you in its web of deceit, lies, corruption, manipulation and colorful characters. David Enrich’s brilliant investigative expose will reverberate from Wall Street to Main Street.” - Harlan Coben, bestselling author of Home and Fool Me Once

“David Enrich has written an incredibly entertaining, globe-straddling inside account of how one trader turbocharged a greedy cabal that scammed savers and borrowers everywhere. A must read if you want to understand how big banks and traders really work.” - Marcus Brauchli, former Executive Editor of the Washington Post and Managing Editor of the Wall Street Journal

“So how did a socially awkward English math whiz mastermind manipulation of lending rates on a global scale? … In David Enrich’s gripping tale, the characters have nicknames worthy of the Mafia, and their ethical compasses aren’t much better.” - Paul Ingrassia, Pulitzer Prize winner, bestselling author of Crash Course

“A thrilling tour de force of reporting, revelation and reasoning. For anyone who wants to understand what really went on inside a scam of epic proportions, The Spider Network is unmissable.” - Iain Martin, author of Crash Bang Wallop

David Enrich is the Finance Editor at the New York Times. He previously was the Financial Enterprise Editor of the Wall Street Journal, heading a team of investigative reporters. Before that, he was the Journal’s European Banking Editor, based in London, and a Journal reporter in New York. He has won numerous journalism awards, including the 2016 Gerald Loeb Award for feature writing. His first book, The Spider Network: How a Math Genius and Gang of Scheming Bankers Pulled Off On of The Greatest Scams in History was short-listed for the Financial Times Best Book of the Year award. Enrich grew up in Lexington, Massachusetts, and graduated from Claremont McKenna College in California. He currently lives in New York with his wife and two sons.

The Price of Prosperity

History of World Trade in Maps

The Myth of the Rational Market

End of The Good Life