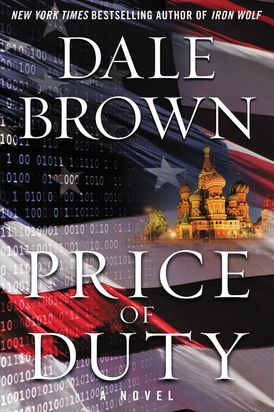 In a top-secret location deep in the Ural Mountains, Russian President Gennadiy Gryzlov has built his nation’s most dangerous weapon since the atomic bomb—a fearsome tool to gain superiority in Russia’s long-running battle with the West. From inside Perun Aerie—an intricate network of underground tunnels and chambers that is the heart of the Russian cyber warfare program—he is launching a carefully plotted series of attacks on an unsuspecting U.S. and its European allies.

The first strike targets Warsaw, Poland, where Russian malware wipes out the records of nearly every Polish bank account, imploding the country’s financial system and panicking the rest of Europe. When Stacy Anne Barbeau, the besieged American president, fails to effectively combat the Russian threat, Brad McLanahan, on some well-earned R&R with his new Polish girlfriend, Major Nadia Rozek, is called back to duty.

As the Russians’ deadly tactics escalate—including full-scale assaults on Europe’s power grid and the remote hijacking of a commercial airliner that kills hundreds of civilians—McLanahan and his Scion team kick into gear, arming themselves with the most advanced technological weaponry for the epic struggle ahead. A patriot in the mold of his father, the late general Patrick McLanahan, Brad knows firsthand the price of freedom.

With the world’s fate hanging in the balance, will Scion succeed in turning back Gryzlov before he can realize his terrifying ambition to conquer the globe? And what will the toll of victory be?

“A tense, atmospheric thriller with a ripped from the headlines plot, PRICE OF DUTY moves at a breakneck pace. Highly readable, enormously entertaining, its twists and turns will keep you glued to the pages.” - Karen Robards, New York Times Bestselling author

“A riveting powerhouse of a novel; action on top of action, fascinating and intricate details about the latest military technology and tactics and a forward-thinking geopolitical plot that yanks the reader along by the collar and takes them on a wild ride. Exciting and intelligent entertainment.” - Mark Greaney, #1 Bestselling Author of Gunmetal Gray

“Strap in, for there are shootouts on every page plus a well-choreographed climactic raid. ... A compelling, fast-paced, and imaginative techno-thriller. ... There’s so much action here it’s a wonder there aren’t bullet holes and bomb craters on every page.” - Kirkus Reviews

“Fans will find Brown in fine form here, and newcomers who enjoy top-notch military fiction will have no trouble diving into the deep end.” - Booklist

“All too real and eerily authentic. One of the godfathers of techno-thrillers, Brown has saved some of his best and most creative story ideas for [Price of Duty].” - The REAL Book Spy

Former US Air Force captain Dale Brown was born in Buffalo, New York. He was still serving in the US Air Force, where he was a navigator-bombardier, when he wrote The Flight of the Old Dog, the first of a string of New York Times-bestselling thrillers. With Jim DeFelice, he has also written five novels in the highly popular series of paperback original novels based in Dreamland, a cutting-edge weapons research facility in the Nevada desert.