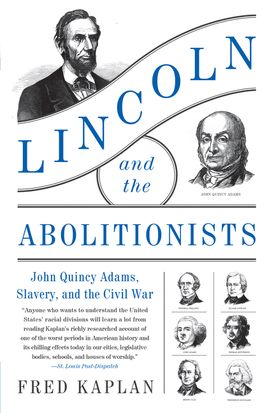 "Anyone who wants to understand the United States' racial divisions will learn a lot from reading Kaplan's richly researched account of one of the worst periods in American history and its chilling effects today in our cities, legislative bodies, schools, and houses of worship." — St. Louis Post-Dispatch

The acclaimed biographer Fred Kaplan returns with a controversial exploration of how Abraham Lincoln’s and John Quincy Adams’ experiences with slavery and race shaped their differing viewpoints, providing perceptive insights into these two great presidents and a revealing perspective on race relations in modern America

Though the Emancipation Proclamation, limited as it was, ultimately defined his presidency, Lincoln was a man shaped by the values of the white America into which he was born. While he viewed slavery as a moral crime abhorrent to American principles, he disapproved of antislavery activists. Until the last year of his life, he advocated “voluntary deportation,” concerned that free blacks in a white society would result in centuries of conflict. In 1861, he reluctantly took the nation to war to save it. While this devastating struggle would preserve the Union, it would also abolish slavery—creating the biracial democracy Lincoln feared.

Years earlier, John Quincy Adams had become convinced that slavery would eventually destroy the Union. Only through civil war, sparked by a slave insurrection or secession, would slavery end and the Union be preserved. Deeply sympathetic to abolitionists and abolitionism, Adams believed that a multiracial America was inevitable. Lincoln and the Abolitionists, a frank look at Lincoln, “warts and all,” including his limitations as a wartime leader, provides an in-depth look at how these two presidents came to see the issues of slavery and race, and how that understanding shaped their perspectives.

Its supporting cast of characters is colorful, from the obscure to the famous: Dorcas Allen, Moses Parsons, Usher F. Linder, Elijah Lovejoy, William Channing, Wendell Phillips, Rufus King, Hannibal Hamlin, Andrew Johnson, Abigail Adams, John Adams, Thomas Jefferson, Henry Clay, Stephen A. Douglas, and Frederick Douglass, among scores of significant others. In a far-reaching historical narrative, Kaplan offers a nuanced appreciation of the great men—Lincoln as an antislavery moralist who believed in an exclusively white America, and Adams as an antislavery activist who had no doubt that the United States would become a multiracial nation—and the events that have characterized race relations in America for more than a century, a legacy that continues to haunt us all.

"Anyone who wants to understand the United States' racial divisions will learn a lot from reading Kaplan's richly researched account of one of the worst periods in American history and its chilling effects today in our cities, legislative bodies, schools, and houses of worship." — St. Louis Post-Dispatch

“In this elegantly written and thoroughly researched book … Kaplan presents a more complex Lincoln who 'presided over the creation of a new reality that neither he nor anyone could fully embrace, or embrace in a way that would eliminate racial conflict.'” — Publishers Weekly