The Legend of Rock Paper Scissors 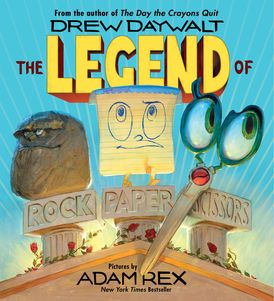 The Legend of Rock Paper Scissors

"Will have listeners in stitches." —Kirkus Reviews (starred review)

From acclaimed, bestselling creators Drew Daywalt, author of The Day the Crayons Quit and The Day the Crayons Came Home, and Adam Rex, author-illustrator of Frankenstein Makes a Sandwich, comes a laugh-out-loud hilarious picture book about the epic tale of the classic game Rock, Paper, Scissors.

"I couldn’t stop laughing while reading this aloud to a group of kids," commented the founder of Bookopolis.com, Kari Ness Riedel.

★ “Cheeky humor and prideful asides will have listeners in stitches. A closer-to-perfect pairing couldn’t be imagined. Everyone wins!” — Kirkus Reviews (starred review)

★ “The earnest gravity of the fighters’ quests paired with the mundane setting and melodramatic tone are perfectly balanced to produce a brand of purely absurd, sidesplitting humor that kids will gobble up.” — Booklist (starred review)

★ “While kids will snicker reading this on their own, it’s perfect for a guffawing share with younger sibs or buddy read, followed, of course, by a rousing game of Rock Paper Scissors.” — Bulletin of the Center for Children’s Books (starred review)

★ “Laugh-out-loud funny and outrageous at times, this read-aloud will have listeners jumping out of their seats. This is the sort of story that makes children love to read.” — School Library Journal (starred review)

’The title and cover image are enough to get you giggling all on their own. But the epic battles depicted by children’s book powerhouses Drew Daywalt and Adam Rex are sure to have us in stitches.” Best Books of the Month — Brightly 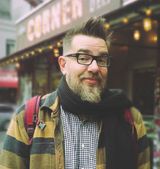 Drew Daywalt is an award-winning, #1 New York Times bestselling children’s author whose books include The Day the Crayons Quit, The Day the Crayons Came Home, and The Legend of Rock Paper Scissors. Drew loves to play Rock, Paper, Scissors, but most of the time he can’t decide fast enough which one to pick and ends up making some bizarre shape with his hand that looks like a weird octopus with a hat. He’ll claim Weird Octopus with Hat beats everything, but don’t let him pull that nonsense on you.

Other Works by Drew Daywalt

Adam Rex is the author of many books, including Cold Cereal and Unlucky Charms, the first two books in the Cold Cereal Saga; the New York Times bestselling picture books The Legend of Rock Paper Scissors and Frankenstein Makes a Sandwich; the middle grade novel The True Meaning of Smekday (now a major motion picture from Dreamworks, Home); and the teen novel Fat Vampire. He lives in Arizona with his wife.

Guys Read: "What? You Think You Got It Rough?"

Guys Read: My Parents Give My Bedroom to a Biker

Guys Read: A Fistful of Feathers