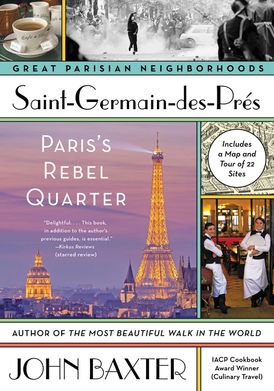 The award-winning chronicler of life in Paris reveals the secrets of his home quarter, Saint-Germain-des-Pres

A unique blend of history, memoir, and sightseeing essentials, Saint-Germain-des-Pres is a captivating "narrative guidebook" to one of Paris's iconic quarters by John Baxter, bestselling author of The Most Beautiful Walk in the World.

Occupying less than a square mile along Paris's Left Bank, Saint-Germain-des-Pres, originally an independent village centered around the medieval abbey that lends the quarter its name, has for centuries been home to rebels of all stripes. Within its boundaries, the French Revolution was plotted, the guillotine invented, and in 1968 students revolted and clashed with police. Philosopher Descartes is buried here (sans skull), while Sartre, Camus, and de Beauvoir birthed existentialism around the tables of the legendary Cafe de Flore. Saint-Germain sheltered and inspired such artistic rebels as Picasso, Rimbaud, Hemingway, and scores of jazz musicians. Today, the neighborhood, with its cobblestone streets, iconic cafes, and unique shopping destinations, is one of Paris's premier tourist attractions. And yet it retains its rebel soul—if you know where to look.

In this first book in his "Great Parisian Neighborhoods" series, Baxter, an expat who has called Saint-Germain home for more than two decades, guides readers on an off-the-beaten-path journey through the quarter's history, landmarks, and delights.

“John Baxter and his incredible knowledge made me feel like I was walking through history. Anyone who reads this book will experience the artists, writers, and beauty of Paris come to life as if they were standing on the streets of St. Germain themselves.” - Maria Bello, actress and author of Whatever... Love is Love

“Another delightful salute to Paris. ... Whether you’re planning your first trip to Paris or absolutely have to stop in Paris on your way anywhere, this book, in addition to the author’s previous guides, is essential.” - Kirkus Reviews (starred review)

“Saint-Germain-des-Prés embodies so much of what makes Paris special. ... It’s precisely this fascinating history that John Baxter has brought to life. ... Baxter is without question a good man to tell the story of one of the City of Light’s most iconic quarters.” - World Traveller

“If you want to know what has made Saint-Germain-des-Prés so special, read this captivating account. As only a long-term resident can, John Baxter offers the reader improbable connections that surprise, amuse, and magically cohere into the story of a Paris quartier like no other.” - Thad Carhart, author of The Piano Shop on the Left Bank

“Saint-Germain’s story, in Baxter’s able hands, spans centuries and often hops its own borders. Readers will surely enjoy the leaps, for the destination here really is the diversion... and will count themselves lucky to be in the company of such an engaging Paris pro.” - Booklist