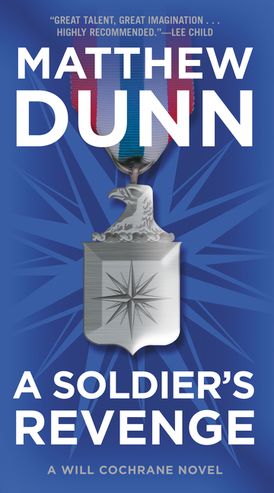 “Will Cochrane…lacks James Bond’s gadgets but relies on encyclopedic knowledge [and] physical prowess…that even Jack Reacher would envy.”
— Publishers Weekly on Dark Spies

Will Cochrane wakes up in a hotel room and finds blood on his hands. When he enters the bathroom, he finds a woman brutally murdered and his own bloody handprint nearby. Will has no memory of the night before, but he is sure he’s being framed. The police will arrive soon, and he can find no evidence that another person, the real killer, was ever in the room.

Will had decided to adopt the sons of a former colleague who was killed in the line of duty, and he was going to see them before he awakened to the carnage. But now he realizes he has a powerful enemy who is out for revenge. And his only chance to clear his name is to find the real killer before the police can find him.

In Virginia, Will discovers the family he was on his way to visit has already been attacked—and his only lead is a secret recording of a voice that might be the killer’s. With the FBI and even his friends pursuing him, Cochrane must track down his adversary, save the boys, and prove his innocence before it’s too late.

“Dunn, who was a field officer in M16, has created a plot with plenty of action

and lots of twists and turns. . . . Nonstop action and relentless danger.”
— Associated Press on Spycatcher