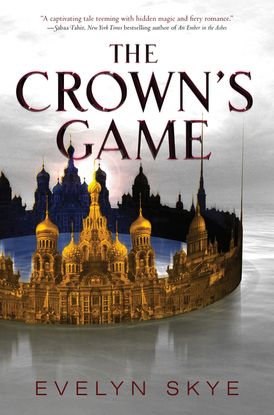 "Teeming with hidden magic and fiery romance."—Sabaa Tahir, #1 New York Times bestselling author of An Ember in the Ashes

Perfect for fans of Shadow and Bone and Red Queen, The Crown’s Game is a thrilling and atmospheric historical fantasy set in Imperial Russia about two teenagers who must compete for the right to become the Imperial Enchanter—or die in the process—from debut author Evelyn Skye.

Vika Andreyeva can summon the snow and turn ash into gold. Nikolai Karimov can see through walls and conjure bridges out of thin air. They are enchanters—the only two in Russia—and with the Ottoman Empire and the Kazakhs threatening, the tsar needs a powerful enchanter by his side.

And so he initiates the Crown’s Game, an ancient duel of magical skill—the greatest test an enchanter will ever know.  The victor becomes the Imperial Enchanter and the tsar’s most respected adviser. The defeated is sentenced to death.

Raised on tiny Ovchinin Island her whole life, Vika is eager for the chance to show off her talent in the grand capital of Saint Petersburg. But can she kill another enchanter—even when his magic calls to her like nothing else ever has?

For Nikolai, an orphan, the Crown’s Game is the chance of a lifetime. But his deadly opponent is a force to be reckoned with—beautiful, whip smart, imaginative—and he can’t stop thinking about her.

And when Pasha, Nikolai’s best friend and heir to the throne, also starts to fall for the mysterious enchantress, Nikolai must defeat the girl they both love . . . or be killed himself.

As long-buried secrets emerge, threatening the future of the empire, it becomes dangerously clear . . . the Crown’s Game is not one to lose.

“Readers will eagerly await the next installment.” - School Library Journal

“The Crown’s Game is a captivating tale that deftly transports readers to a mysterious and fascinating fantasy world, one teeming with hidden magic and fiery romance.” - Sabaa Tahir, #1 New York Times bestselling author of An Ember in the Ashes

“Utterly enchanting. The true wizardry is in the atmosphere—Skye crafts a Russia of magic and elegance, depicting St. Petersburg in such a breath-taking way that you’ll swear you’re standing on the banks of the Neva and dancing through the halls of the Winter Palace.” - Sara Raasch, author of the Snow LIke Ashes trilogy

“Gorgeous and richly imagined, The Crown’s Game is a dazzling exploration of the choices we make when faced with impossible situations and our darker selves. Readers will fall unabashedly in love with this novel.” - Sara Grochowski, Brilliant Books

“It was beautiful. It was terrible. I loved it.” - Hafsah Faizal, Icey Books

“The Night Circus meets Cinderella in an alternate Russia. This extraordinary world has everything from insanely creative acts of magic, political intrigue, hope against all odds, romance, and oh-such-high-stakes-non-stop action. It is hands-down honest-to-goodness brilliant. Bravo.” - Angela Mann, Keplers Books 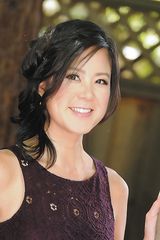 Evelyn Skye was once offered a job by the CIA, she not-so-secretly wishes she was on So You Think You Can Dance, and if you challenge her to a pizza-eating contest, she guarantees she will win. When she isn’t writing, Evelyn can be found chasing her daughter on the playground or sitting on the couch immersed in a good book and eating way too many cookies. She is the author of the New York Times bestseller The Crown’s Game and its sequel, The Crown's Fate. Evelyn can be found online at www.evelynskye.com and on Twitter @EvelynSkyeYA.

Other Works by Evelyn Skye