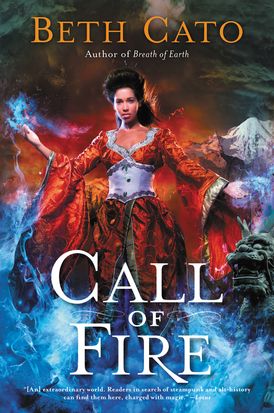 A resourceful young heroine must protect the world from her enemies—and her own power—in this thrilling sequel to the acclaimed Breath of Earth, an imaginative blend of alternative history, fantasy, science, magic, and adventure.

When an earthquake devastates San Francisco in an alternate 1906, the influx of geomantic energy nearly consumes Ingrid Carmichael. Bruised but alive, the young geomancer flees the city with her friends, Cy, Lee, and Fenris. She is desperate to escape Ambassador Blum, the cunning and dangerous bureaucrat who wants to use Ingrid’s formidable powers to help the Unified Pacific—the confederation of the United States and Japan—achieve world domination. To stop them, Ingrid must learn more about the god-like magic she inherited from her estranged father—the man who set off the quake that obliterated San Francisco.

When Lee and Fenris are kidnapped in Portland, Ingrid and Cy are forced to ally themselves with another ambassador from the Unified Pacific: the powerful and mysterious Theodore Roosevelt. But even TR’s influence may not be enough to save them when they reach Seattle, where the magnificent peak of Mount Rainier looms. Discovering more about herself and her abilities, Ingrid is all too aware that she may prove to be the fuse to light the long-dormant volcano . . . and a war that will sweep the world.

“A powerful, fast-paced, entertaining enigma, a fantastic melding of alternate history and urban fantasy with a definite taste of steampunk thrown in. Memorable costars, a protagonist with real star power, picturesque scenes and her use of mythical Asian creatures, plus flowing dialogue, make it a real page-turner.” - RT Book Reviews

“The plot moves briskly...and while the book builds on the complicated world of this alternate history, it remains simple, entertaining, and difficult to put down. Cato’s skill at creating engaging characters shines throughout.” - Kirkus Reviews

“The acclaimed Cato creates an alternate early 20th-century San Francisco of stunning detail. Drawing on the power struggles of the refugees and women’s work, this vivid reality will keep readers intrigued to the very end.” - Library Journal (starred review) on Breath of Earth

“With an interesting mix of steampunk, alternate history and urban fantasy, this mystery and slow-building romance - first in Cato’s new series - is excitingly different. Her marvelous star is multi-faceted and her co-stars are colorful. Her fantastical fiction is unique.” - Romantic Times Book Reviews on Breath of Earth 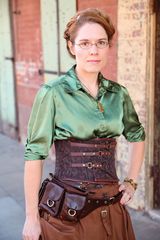 Nebula Award–nominated author Beth Cato hails from Hanford, California, but currently writes and bakes cookies in a lair west of Phoenix, Arizona. She’s the author of the Clockwork Dagger duology and the Blood of Earth trilogy, plus scores of other short stories and poems across a multitude of publications. She shares her household with a hockey-loving husband, a numbers-obsessed son, and three feline overlords.

Other Works by Beth Cato