The Elementia Chronicles #1: Quest for Justice 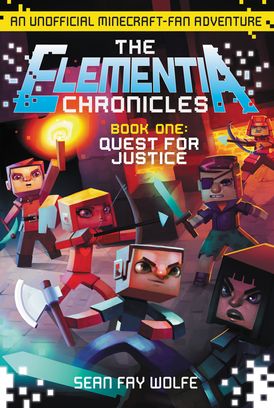 The Elementia Chronicles #1: Quest for Justice

Fans of the bestselling video game Minecraft, middle grade readers, and action-adventure story enthusiasts of all ages are about to embark on an exciting journey that will take them far beyond the world they know.

Dark forces are at work on the Elementia server, and when new players Stan, Kat, and Charlie arrive on the scene, they quickly find themselves in peril. Targeted by more experienced players, the noobs must band together against the king, battle the natural forces of the game, and unravel the mysteries of Elementia in the name of justice.

Written when he was sixteen, Sean Fay Wolfe's Quest for Justice is the debut novel by an unstoppable young storyteller and the first book in The Elementia Chronicles trilogy.

Disclaimer: This book is not authorized, sponsored, endorsed or licensed by Mojang AB, Microsoft Corp. or any other person or entity owning or controlling any rights to the Minecraft name, trademarks or copyrights. Minecraft is a registered trademark of Mojang Synergies AB.

Sean Fay Wolfe was 16 years old when he finished Quest for Justice, the first book of The Elementia Chronicles trilogy; and 17 when he finished the second book. He is an avid Minecraft player and loves creating action adventure tales in its endlessly creative virtual world. Sean lives with his mother, father, grandmother, two brothers, three cats, and a little white dog named Lucky.

Other Works by Sean Fay Wolfe

The Elementia Chronicles #2: The New Order