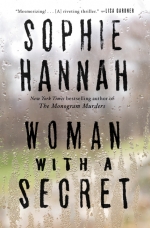 “Unpredictable, unputdownable, and unlike anything you’ve read before.”—Liane Moriarty

She’s a wife. She’s a mother. She isn’t who you think she is.

Nicki Clements has secrets, just like anybody else—secrets she keeps from her children, from her husband, from everyone who knows her. Secrets she shares with only one person: a stranger she’s never seen. A person whose voice she’s never heard.

And then Nicki is arrested for murder. The murder of a man she doesn’t know.

As a pair of husband-and-wife detectives investigate her every word, as the media circle like sharks, all Nicki’s secrets are laid bare—illusions and deceptions that she has maintained for years. And even the truth might not be enough to save her. For although Nicki isn’t guilty of homicide, she’s far from innocent. . . .

For fans of The Girl on the Train, Gone Girl, and the best of Hitchcock comes an extraordinary thriller—and an extraordinarily unreliable narrator—from an author whose work has been described by Tana French as “like watching a nightmare come to life.”

“Mesmerizing! Sophie Hannah puts the ‘psycho’ in psychological suspense with this riveting thriller involving the ultimate closed-door crime scene--and a narrator who is both more and less than what she seems.” — Lisa Gardner, #1 New York Times-bestselling author of Crash and Burn and Fear Nothing

“No one writes twisted, suspenseful novels quite like Sophie Hannah. I just love her dry, edgy wit and the way she brings her weirdly wonderful characters to life. Woman With a Secret is unpredictable, unputdownable, and unlike anything you’ve read before.” — Liane Moriarty, #1 New York Times bestselling author of Big Little Lies and The Husband's Secret

“Her plots are ingenious—she’s a writer in complete command of her material—and it’s O.K. if you haven’t quite kept up. She keeps you puzzled and intrigued, right until the end.” — The New York Times Book Review

“Kept me guessing at every turn. Sophie Hannah...has clearly mastered the psychological methodology [of] Gillian Flynn or Tana French. Her unreliable narrator commands our attention and even our sympathy.” — NPR

“Witty and suspenseful...moves with the speed and unpredictability of a pinball. The author portions out Nicki’s secrets in ways that both heighten tension and increase sympathy for this unusual protagonist.” — The Wall Street Journal

The Couple at the Table

Only Joseph: A Story from the collection, I Am Heathcliff