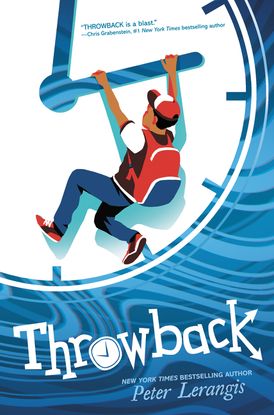 Peter Lerangis, the New York Times bestselling author of the Seven Wonders and Max Tilt series, returns with an electrifying new trilogy about a boy who discovers that he alone may be able to alter the course of history.

Corey Fletcher has an active imagination. He sees things no one else does. Cracks jokes no one else gets. And goes places few would ever dare go. Like the past.

All he needs is a metal artifact from a point in time, and Corey can go there. Although hundreds of time travelers live in secret throughout the world, including Corey's own grandfather, none has the ability to change past events.

But when Corey accidentally saves a life while time traveling, he realizes that he is the first-ever “Throwback,” with the power to alter life as we know it. Which means his own life is now in all sorts of danger.

This is the first book in a thrilling, edge-of-your-seat adventure series from New York Times bestselling author Peter Lerangis, whose books have sold over five and a half million copies worldwide.

“This is an emotional journey, full of heart, about family and wanting to change the past. It’s the kind of story that stays with you long after reading, and it will resonate with many.” - Booklist

“With this exciting adventure, Lerangis (the Seven Wonders series) captures the diversity of New York throughout the decades….the thought-provoking concept and Corey’s own heartbreaking attempts to prevent tragedy should easily draw readers.” - Publishers Weekly

“A trilogy opener with all the makings of a grand tale.” - Kirkus Reviews

"The plot rockets along but notably avoids sacrificing details for pace, and it offers up plenty of word puzzles, trivia, and bits of New York history along the way. Corey and Leila... are likable, genuine, and brave, just the kind of kids that readers would want to join on an adventure, including this one and those to come." - Bulletin of the Center for Children’s Books

PETER LERANGIS is the author of more than 160 books, which have sold more than four million copies and been translated into 27 different languages, including two books in the New York Times bestselling series The 39 Clues. He lives in New York City with his wife, musician Tina deVaron, and their two sons, Nick and Joe. In his spare time, he likes to eat chocolate. Lots of it. Seriously, he loves chocolate.