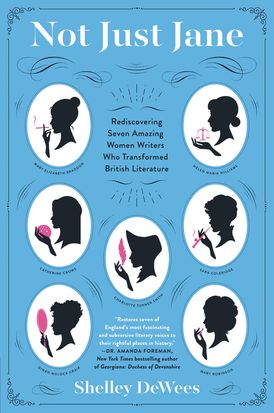 “Not Just Jane restores seven of England’s most fascinating and subversive literary voices to their rightful places in history. Shelley DeWees tells each woman writer’s story with wit, passion, and an astute understanding of the society in which she lived and wrote.”

Jane Austen and the Brontës endure as British literature’s leading ladies (and for good reason)—but were these reclusive parsons’ daughters really the only writing women of their day? A feminist history of literary Britain, this witty, fascinating nonfiction debut explores the extraordinary lives and work of seven long-forgotten authoresses, and asks: Why did their considerable fame and influence, and a vibrant culture of female creativity, fade away? And what are we missing because of it?

You’ve likely read at least one Jane Austen novel (or at least seen a film one). Chances are you’ve also read Jane Eyre; if you were an exceptionally moody teenager, you might have even read Wuthering Heights. English majors might add George Eliot or Virginia Woolf to this list…but then the trail ends. Were there truly so few women writing anything of note during late 18th and 19th century Britain?

In Not Just Jane, Shelley DeWees weaves history, biography, and critical analysis into a rip-roaring narrative of the nation’s fabulous, yet mostly forgotten, female literary heritage. As the country, and women’s roles within it, evolved, so did the publishing industry, driving legions of ladies to pick up their pens and hit the parchment. Focusing on the creative contributions and personal stories of seven astonishing women, among them pioneers of detective fiction and the modern fantasy novel, DeWees assembles a riveting, intimate, and ruthlessly unromanticized portrait of female life—and the literary landscape—during this era. In doing so, she comes closer to understanding how a society could forget so many of these women, who all enjoyed success, critical acclaim, and a fair amount of notoriety during their time, and realizes why, now more than ever, it’s vital that we remember.

“An industrious work by an adoring reader…. Her converting zeal is apparent on every page, holding up passages of poems and novels to tempt us. With verve and brio, she imagines her modern self into her subjects’ minds.” - Wall Street Journal

“Not Just Jane restores seven of England’s most fascinating and subversive literary voices to their rightful places in history. Shelley DeWees tells each woman writer’s story with wit, passion, and an astute understanding of the society in which she lived and wrote.” - Dr. Amanda Foreman, New York Times bestselling author of Georgiana: Duchess of Devonshire and creator of docuseries The Ascent of Woman

“Not merely delightful nonfiction. It’s a moving and heartfelt tribute to seven forgotten literary foremothers whose works were widely admired and just as widely consigned to moldering oblivion. What we need are many more books in the spirit of Not Just Jane.” - Lyndsay Faye, author of Jane Steele

“Shelley DeWees has admirably filled in the gaps for us, introducing us to the many daring, exciting women writers out there beyond Austen, the Brontës, Eliot, and Woolf. If you want to know not only what women were up against in the pre-modern era but also how women turned to the pen as a source of liberation, then this is the book for you.” - Anne Boyd Rioux, author of Constance Fenimore Wilson: Portrait of a Lady Novelist

“I found Not Just Jane delightfully engaging. DeWees emerges as the Indiana Jones of literary archeology, and we are forever in her debt.” - Laurel Ann Nattress, editor of Jane Austen Made Me Do It and Austenprose.com

“Second Wave feminism reclaimed long-forgotten late 18th and early 19th century ‘authoresses’, but they still largely remain unknown outside the academic community. Now Shelley DeWees’s readable and engaging study of seven of the best introduces them to a wider audience. They deserve it.” - Professor Janet Todd, OBE, editor of The Cambridge Edition of the Works of Jane Austen

“Reveal[s] the interesting lives and strong characters of these oft-forgotten writers…. This book succeeds at making readers aware of the gaps in our knowledge of British literature…planting the seed that there are many treasures out there waiting for a second chance. - Kirkus Reviews

“Masterfully weaves a tale of history, culture, and writing.… Not Just Jane is a gem, a rediscovery of female perseverance in a patriarchal society, and shows how deftly, artfully, and successfully female writers can navigate their circumstances.” - Los Angeles Review of Books

“Together, the essays work to broaden our understanding of literary history.” - Book Riot, “20 Great Essay Collections from 2016”

“DeWees’s biographical assessment of seven English women authors of the 18th and 19th centuries marks an enthusiastic…addition to the ongoing project of recovering ‘lost’ women writers…. She does important work in challenging the notion of canon.” - Publishers Weekly

“A true delight, both for its honorable mission and for its eloquent execution.” - Chronic Bibliophilia

“Fun.... Lovers of Austen’s books and film adaptations of her work will find much to enjoy in this informative overview of authors.” - Library Journal

“Interweaving the fascinating stories…and the social, cultural, and economic realities of their times, an insightful group portrait of these groundbreaking women emerges. Lively…. An important contribution to the scholarship of women’s literature.” - Booklist 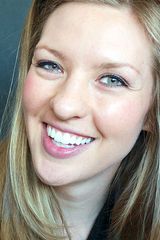 Shelley DeWees has a graduate degree in ethnomusicology, several tattoos, and a documented obsession with British literature. Her writing has appeared in Austenprose, Jane Austen’s World, and Jane Austen Today, and after time spent teaching in Korea she recently moved back to Minneapolis with her husband.

Other Works by Shelley DeWees