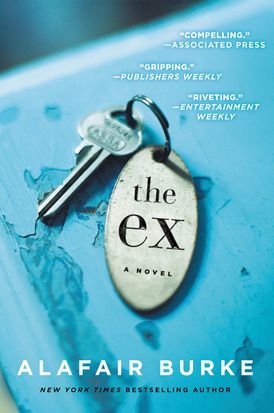 In this breakout standalone novel of suspense in the vein of Gone Girl and The Girl on a Train, a woman agrees to help an old boyfriend who has been framed for murder—but begins to suspect that she is the one being manipulated.

And look for Alafair Burke’s latest heart-racing novel of psychological suspense, The Wife, coming in January 2018.

Twenty years ago she ruined his life. Now she has the chance to save it.

Widower Jack Harris has resisted the dating scene ever since the shooting of his wife Molly by a fifteen-year-old boy three years ago. An early morning run along the Hudson River changes that when he spots a woman in last night’s party dress, barefoot, enjoying a champagne picnic alone, reading his favorite novel. Everything about her reminds him of what he used to have with Molly. Eager to help Jack find love again, his best friend posts a message on a popular website after he mentions the encounter. Days later, that same beautiful stranger responds and invites Jack to meet her in person at the waterfront. That’s when Jack’s world falls apart.

Olivia Randall is one of New York City’s best criminal defense lawyers. When she hears that her former fiancé, Jack Harris, has been arrested for a triple homicide—and that one of the victims was connected to his wife’s murder—there is no doubt in her mind as to his innocence. The only question is who would go to such great lengths to frame him—and why?

For Olivia, representing Jack is a way to make up for past regrets, to absolve herself of guilt from a tragic decision, a secret she has held for twenty years. But as the evidence against him mounts, she is forced to confront her doubts. The man she knew could not have done this. But what if she never really knew him?

“Burke tells a compelling legal thriller that will have readers baffled until the final reveal.... Burke knows how to write, and Olivia Randall is one of her most authentic characters. No one would object if this is the start of a new series.” - Lisa Ko, author of The Leavers

“Intriguing, suspenseful, compelling, insightful, surprising, and thoroughly satisfying — The Ex is a great read.” - Chris Pavone, The Accident and The Expats

“Strong characters and a plot that’s handled deftly, despite its complexities, show Burke at the top of her game here. This is a compelling legal thriller with a strong emotional component grounded in a solid rational base, with a final twist to boot.” - Library Journal, starred review

“With an all-too-real mass shooting in a richly-observed Manhattan as its springboard, The Ex is an expertly crafted, intricately woven novel that is as emotionally complex as it is riveting.” - Kimberly McCreight, New York Times bestselling author of Reconstructing Amelia and Where They Found Her

“Features smooth, engaging writing; a sharp, funny edge; and characters worth investing in. Burke has created some memorable female protagonists over the years, but Olivia might be the cream of the crop.” - Kirkus

“Briskly told and packed with plot, The Ex rocks. . . . A nifty bit of fine suspense.” - New York Journal of Books

“A deeply wrought, emotional story that transcends the crime at its core. This is perhaps her best work to date.” - Strand

“This thought-provoking novel is brilliantly crafted, with a compelling and complex plot.” - Bookreporter.com

“Superb.... Burke delivers a multi-layered plot that explores relationships and manipulation in a rich character study.... Anyone who has a former boyfriend—or girlfriend—will be able to relate to Olivia’s situation.... “The Ex” doesn’t let up until the final, believable twist.” - Florida Sun-Sentinel