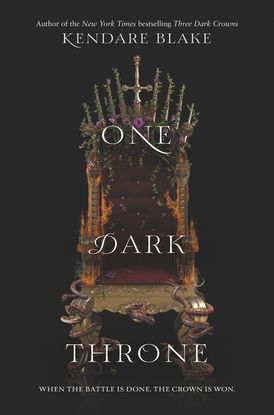 In this enthralling sequel to Kendare Blake’s New York Times bestselling Three Dark Crowns, Fennbirn’s deadliest queens must face the one thing standing in their way of the crown: each other.

The battle for the crown has begun, but which of the three sisters will prevail? With the unforgettable events of the Quickening behind them and the Ascension Year underway, all bets are off.

Katharine, once the weak and feeble sister, is stronger than ever before. Arsinoe, after discovering the truth about her powers, must figure out how to make her secret talent work in her favor without anyone finding out. And Mirabella, once thought to be the strongest sister of all and the certain Queen Crowned, faces attacks like never before—ones that put those around her in danger she can’t seem to prevent.

“This sequel to Three Dark Crowns loses none of that book’s momentum, powering toward a conclusion that leaves several doors open. With wonderfully drawn characters and a lethal, unpredictable plot, this follow-up will leave readers breathless as the queens’ fates unfold.” - ALA Booklist

“Blake skillfully guides readers through the complex chain of events while keeping her large cast of characters ignorant of each other’s tactics and motivations. Fans of Game of Thrones and dark fantasies will revel in this story of betrayal and survival.” - Voice of Youth Advocates (VOYA)

“New exciting heights with a driving plot. Dark indeed, and exploring themes of loyalty, this is a thrilling sequel with everything from action to romance to entice readers. A strong purchase for YA fantasy shelves.”   - School Library Journal

“Riveting. This book hits the ground running and keeps you guessing with each unpredictable twist.” - Brightly

PRAISE FOR THREE DARK CROWNS: “Three Dark Crowns is a brutal and inventive fantasy that is as addictive as it is horrifying. I can’t begin to guess the fates of these three remarkable sister-queens, but I’m salivating like poisoners at a feast to find out what will happen next.” - Marissa Meyer, New York Times bestselling author of the Lunar Chronicles

“Full of mystery, intrigue, and deadly girls I wouldn’t dare cross, Fennbirn is a darkly magical world I’m both drawn to and frightened by. In short, this is a book I could linger in for months, with three girls I am rooting for with all my heart.” - Megan Shepherd, New York Times bestselling author of The Cage series (on THREE DARK CROWNS)

“With exquisite world building and luminous detail, this is high fantasy at its best. The magic is fierce and the plot intensely twisted, but at this novel’s dark heart beats a story about sisterhood, the unbreakable bonds of family, and ties that bind enough to kill.” - Booklist (starred review)

“I loved this book. Blake’s THREE DARK CROWNS is hypnotic, twisting, and beautiful...as satisfying as a drop of poison in an enemy’s cup.” - April Genevieve Tucholke, author of Wink, Poppy, Midnight

“Blake is a sure hand with complicated and intricate plots, and if that’s not enough to make readers stick around for the next installment, the cliffhanger ending certainly will.” - Bulletin of the Center for Children’s Books 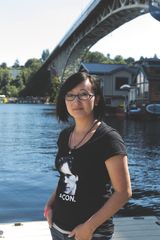