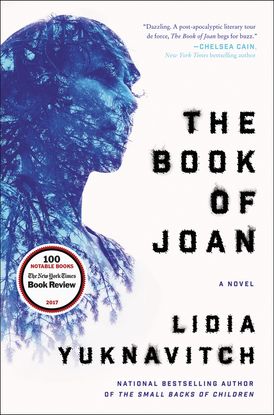 The 25 Most Anticipated Books by Women for 2017, Elle Magazine

The 32 Most Exciting Books Coming Out in 2017, BuzzFeed

Most Anticipated, The Great 2017 Book Preview, The Millions

“Brilliant and incendiary. . . . Radically new, full of maniacal invention and page-turning momentum. . . .Yuknavitch has exhibited a rare gift for writing that concedes little in its quest to be authentic, meaningful and relevant. By adding speculative elements to The Book of Joan, she reaches new heights with even higher stakes: the death or life of our planet.”
— Jeff VanderMeer, New York Times Book Review (cover review)

“Stunning. . . . Yuknavitch understands that our collective narrative can either destroy or redeem us, and the outcome depends not just on who’s telling it, but also on who’s listening.”
— O, The Oprah Magazine

“[A] searing fusion of literary fiction and reimagined history and science-fiction thriller and eco-fantasy. . . Yuknavitch is a bold and ecstatic writer.”
— NPR Books

“[The Book of Joan] offers a wealth of pathos, with plenty of resonant excruciations and some disturbing meditations on humanity’s place in creation . . . [It] concludes in a bold and satisfying apotheosis like some legend out of The Golden Bough and reaffirms that even amid utter devastation and ruin, hope can still blossom.”
— Washington Post

The bestselling author of The Small Backs of Children offers a vision of our near-extinction and a heroine—a reimagined Joan of Arc—poised to save a world ravaged by war, violence, and greed, and forever change history, in this provocative new novel.

In the near future, world wars have transformed the earth into a battleground. Fleeing the unending violence and the planet’s now-radioactive surface, humans have regrouped to a mysterious platform known as CIEL, hovering over their erstwhile home. The changed world has turned evolution on its head: the surviving humans have become sexless, hairless, pale-white creatures floating in isolation, inscribing stories upon their skin.

Out of the ranks of the endless wars rises Jean de Men, a charismatic and bloodthirsty cult leader who turns CIEL into a quasi-corporate police state. A group of rebels unite to dismantle his iron rule—galvanized by the heroic song of Joan, a child-warrior who possesses a mysterious force that lives within her and communes with the earth. When de Men and his armies turn Joan into a martyr, the consequences are astonishing. And no one—not the rebels, Jean de Men, or even Joan herself—can foresee the way her story and unique gift will forge the destiny of an entire world for generations.

A riveting tale of destruction and love found in the direst of places—even at the extreme end of post-human experience—Lidia Yuknavitch’s The Book of Joan raises questions about what it means to be human, the fluidity of sex and gender, and the role of art as a means for survival.

“In this brilliant and incendiary new novel, mixing realism and fabulism, Earth, circa 2049, has been devastated by global warming and war; the wealthy live on a suborbital complex ruled by a billionaire celebrity turned dictator.” - New York Times Book Review, Editor’s Choice

“Stunning.... Yuknavitch understands that our collective narrative can either destroy or redeem us, and the outcome depends not just on who’s telling it, but also on who’s listening.” - O, The Oprah Magazine

“[A] searing fusion of literary fiction and reimagined history and science-fiction thriller and eco-fantasy...Yuknavitch is a bold and ecstatic writer, wallowing in sex and filth and decay and violence and nature and love with equal relish.” - NPR Books

“Lidia Yukanavitch is skilled at writing poetically about the human body, and about nature, so this book ― her first foray into science fiction ― makes sense. It’s a retelling of the story of Joan of Arc, but in a world ravaged by radiation, and with few land-based survivors.” - Huffington Post, 17 Spine-Tingling New Books for Fans of Dystopia

“Joan [of Arc] offers herself as the perfect figure for Yuknavitch’s new novel. Translated into a dystopian future, this New Joan of Dirt serves as emblem for all the stalwart commoners in whose crushing defeat lies a kind of inviolate spiritual victory. . . . [The Book of Joan] offers a wealth of pathos, with plenty of resonant excruciations and some disturbing meditations on humanity’s place in creation . . . [It] concludes in a bold and satisfying apotheosis like some legend out of The Golden Bough and reaffirms that even amid utter devastation and ruin, hope can still blossom.” - Washington Post

“While delivering an entirely new world and also putting forth a powerful treatise on the way we live now, The Book of Joan is one of those dystopian novels that you can’t help thinking might be too eerily real to be just fiction.” - Newsweek

“While delivering an entirely new world and also putting forth a powerful treatise on the way we live now, The Book of Joan is one of those dystopian novels that you can’t help thinking might be too eerily real to be just fiction.” - USA Today, Best New Book Releases of April 18

“In a new kind of world, we need a new kind of hero and a reimagined Joan of Arc from Yuknavitch seems like just the thing.” - The Millions, Most Anticipated Books for April

“The Book of Joan is ferocious and indelible, grappling with what it means to love in the midst of violence; and how we transform fury, agony, and history into art. It is huge in its scope, moving seamlessly, quantumly, between dirt and cosmos, and through the wormholes of nonlinear time.” - Electric Literature

“Breathtaking, embattled, and consuming. Startling and badass. Subversive. Eviscerating. Terrifying and hopeful...Written in the tradition of all great science fiction, The Book of Joan reminds readers of the profound power even one lone voice can have in inspiring a revolution, influencing freedom and justice for generations to come.” - Bustle

“A dystopian story of power that questions what it means to be human.” - Real Simple

“The heart-stopping climax will surprise readers of this dystopian tale that ponders the meanings of gender, sex, love, and life.” - Booklist

“Riveting, ravishing, and crazy deep, The Book of Joan is as ferociously intelligent as it is heart-wrenchingly humane, as generous as it is relentless, as irresistible as it is important. In other words, it’s classic Lidia Yuknavitch: genius.” - Cheryl Strayed, New York Times bestselling author of Wild

“Lidia Yuknavitch is a writer who, with each ever more triumphant book, creates a new language with which she writes the audacious stories only she can tell. The Book of Joan is a raucous celebration, a searing condemnation, and fiercely imaginative retelling of Joan of Arc’s transcendent life.” - Roxane Gay, New York Times bestselling author of Bad Feminist and An Untamed State

“Reading The Book of Joan is a meditation on art and sex and war. My brain is full-bloomed. Get ready, it’s glorious.” - Amber Tamblyn, author of Dark Sparkler

“Dazzling. A post-apocalyptic literary tour de force, The Book of Joan begs for buzz. There is so much here that is transgressive and badass and nervy and transformational. Here is a Katniss Everdeen for grown-ups.” - Chelsea Cain, New York Times bestselling author of Let Me Go, Kill You Twice and The Night Season

“Lidia Yuknavitch’s The Book of Joan inscribes whatever blank canvasses it finds-space, skin, alabaster hallways, holding cells called Liberty Rooms-to tell the story of the vital and violent Joan. As with Dora, the price for entry into Yuknavitch’s world is corporeal. Her narrators demand we shed all fear of the body and step into a new literary nakedness. The Book of Joan is graffiti in white ink. It is where experimentalism meets the dirty earth and gets saved.” - Vanessa Veselka, author of Zazen

“Lidia Yuknavitch’s new book has left me throttled and close to speechless. Speculative doesn’t begin to describe this sexy, imaginative and thoroughly original work. Atwood, LeGuin and Lessing come to mind, but Yuknavitch’s sensibility, which includes her casual ability to completely blow your mind, is all her own.” - Karen Karbo, New York Times bestselling author of Julia Child Rules and How Georgia Became O'Keeffe 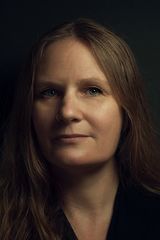 Lidia Yuknavitch is the author of the National Bestselling novel The Small Backs of Children, winner of the 2016 Oregon Book Award's Ken Kesey Award for Fiction as well as the Reader's Choice Award, the novel Dora: A Headcase, and three books of short stories. Her widely acclaimed memoir The Chronology of Water was a finalist for a PEN Center USA award for creative nonfiction and winner of a PNBA Award and the Oregon Book Award Reader's Choice. She founded the workshop series Corporeal Writing in Portland Oregon, where she also teaches Women's Studies, Film Studies, Writing, and Literature. She received her doctorate in Literature from the University of Oregon. She lives in Oregon with her husband Andy Mingo and their renaissance man son, Miles. She is a very good swimmer.

Other Works by Lidia Yuknavitch

On Her Majesty's Behalf

By the Blood of Heroes

Where I Found You

Another Way to Fall