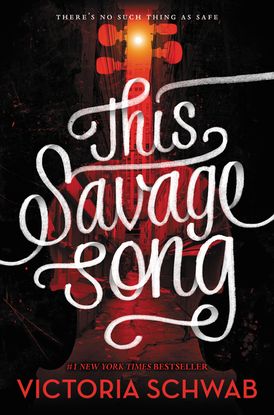 Barnes & Noble YA Book of the Month

There’s no such thing as safe in a city at war, a city overrun with monsters. In this dark urban fantasy from acclaimed author Victoria Schwab, a young woman and a young man must choose whether to become heroes or villains—and friends or enemies—with the future of their home at stake.

The first of two books, This Savage Song is a must-have for fans of Holly Black, Maggie Stiefvater, and Laini Taylor.

Kate Harker and August Flynn are the heirs to a divided city—a city where the violence has begun to breed actual monsters. All Kate wants is to be as ruthless as her father, who lets the monsters roam free and makes the humans pay for his protection. All August wants is to be human, as good-hearted as his own father, to play a bigger role in protecting the innocent—but he’s one of the monsters. One who can steal a soul with a simple strain of music.

When the chance arises to keep an eye on Kate, who’s just been kicked out of her sixth boarding school and returned home, August jumps at it. But Kate discovers August’s secret, and after a failed assassination attempt the pair must flee for their lives.

In This Savage Song, Victoria Schwab creates a gritty, seething metropolis, one worthy of being compared to Gotham and to the four versions of London in her critically acclaimed fantasy for adults, A Darker Shade of Magic. Her heroes will face monsters intent on destroying them from every side—including the monsters within.

“A violently thoughtful, brilliant triumph of a book that will blind you with its genius.” - Gaby Salpeter, Books of Wonder

“There are no wasted words here, and the end result is a darkly precise narrative that feels like a shiver down the spine…this taut creation about the nature of humanity lingers long after its disquieting finale.” - Booklist (starred review)

“Schwab’s latest seems poised to grab both her adult and teen readers; the world is fascinating…the characters complicated, and the political machinations and emotional depths both charged and compelling. …Crackling with energy, just the ticket for an all-night read.” - Kirkus Reviews

“Schwab explores the natures of justice and humanity in an assuredly built world with a compelling settings and an intriguing music-based magic. And in August and his Sunai siblings, she introduces a type of monster both sympathetic and terrifying. A cliffhanger ending promises a sequel.” - The Horn Book

“Kate and August both undergo an impressive amount of character development, and fans will like them despite their flaws. Combined with the nonstop action and the author’s immersive writing style, this first purchase is sure to be a hit with older teens and fans of urban fantasy.” - School Library Journal

“Schwab has built a strange, captivating alternate America filled with offbeat, fascinating characters. …Readers looking for a dangerous and engrossing new world to fall into will find it with this fast-paced, frightening read.” - Publishers Weekly

“The pacing is fast, the narrative enthralling, but it is the depths of the novel - its acuteness of moral imagination and perception - that will stay with you afterward. My highest recommendation.” - San Diego Union-Tribune

“Gritty dialogue and realistic scenes of violence will have senior high school students who enjoy The Hunger Games and Divergent series awaiting the next book in this series.” - Voice of Youth Advocates (VOYA)

“Unique, thrilling, and impossible to predict, This Savage Song is something entirely new, and fans of YA will want to seek out this dark and powerful novel. ...Schwab has written a book with moments of cruelty and bleakness that also includes high adventure and heroic achievements.” - Locus

Victoria Schwab is the author of the #1 New York Times bestseller This Savage Song and its best-selling sequel, Our Dark Duet. She is also the author of the middle grade trilogy beginning with City of Ghosts. Under the name V. E. Schwab, she has written the best-selling adult fantasy Shades of Magic trilogy and the duology Vicious and Vengeful. When she's not haunting Paris streets or trudging up English hillsides, she lives in Nashville, Tennessee, and is usually tucked in the corner of a coffee shop, dreaming up monsters. www.veschwab.com

Other Works by Victoria Schwab