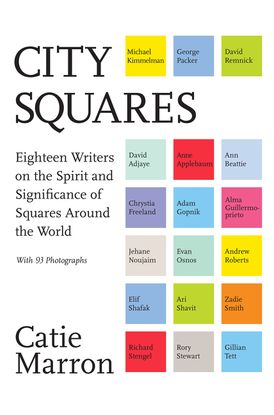 In this important collection, eighteen renowned writers, including David Remnick, Zadie Smith, Rebecca Skloot, Rory Stewart, and Adam Gopnik evoke the spirit and history of some of the world’s most recognized and significant city squares, accompanied by illustrations from equally distinguished photographers.

Over half of the world’s citizens now live in cities, and this number is rapidly growing. At the heart of these municipalities is the square—the defining urban public space since the dawn of democracy in Ancient Greece. Each square stands for a larger theme in history: cultural, geopolitical, anthropological, or architectural, and each of the eighteen luminary writers has contributed his or her own innate talent, prodigious research, and local knowledge.

Divided into three parts: Culture, Geopolitics, History, headlined by Michael Kimmelman, David Remnick, and George Packer, this significant anthology shows the city square in new light. Jehane Noujaim, award-winning filmmaker, takes the reader through her return to Tahrir Square during the 2011 protest; Rory Stewart, diplomat and author, chronicles a square in Kabul which has come and gone several times over five centuries; Ari Shavit describes the dramatic changes of central Tel Aviv’s Rabin Square; Rick Stengel, editor, author, and journalist, recounts the power of Mandela’s choice of the Grand Parade, Cape Town, a huge market square to speak to the world right after his release from twenty-seven years in prison; while award-winning journalist Gillian Tett explores the concept of the virtual square in the age of social media.

This collection is an important lesson in history, a portrait of the world we live in today, as well as an exercise in thinking about the future. Evocative and compelling, City Squares will change the way you walk through a city.

“Catie Marron has done a splendid job of bringing together some of the smartest voices to reflect on some of the most beautiful or important or intriguing public spaces in the world. The result is itself magical.” — Fareed Zakaria, In Defense of A Liberal Education

“A charming and informative guide to the architecture, history, politics, and culture of landmark square…. City squares are vital spaces throughout much of the globe.… Beautiful photos follow each essay.” — Chicago Tribune

“Kaleidoscopic….A lively and stylishly illustrated collection, it’s perfect for dipping into on a bench in Union Square, or with an aperitivo in the Campo de’Fiori.” — Financial Times

“City Squares is a beautiful and haunting collection of essays by some of the finest writers of today. Each chapter is a jewel in itself. Taken together, however, these essays demonstrate the endurance of the human spirit in the spaces and squares of public life.” — Dr. Amanda Foreman, historian and author of Georgiana, Duchess of Devonshire and A World on Fire

“The essays and their accompanying photography interact with one another, constructing a cross-cultural narrative of diverse societal interaction and activism.” — Publishers Weekly

“A corrective to travel writing’s tendency to obsess over wilderness and mountains, this collection of essays zooms in on the squares at the heart of the world’s cities.” — Financial Times Summer Books

“The contributions…are thoughtful and sometimes even surprising…. A worthy celebration of the ‘one essential urban space’…. Dozens of images make a grand testimonial to how people live their lives in public spaces.” — Kirkus Reviews

“City Squares packs an anthropological punch…. The book isn’t just a chronicle of the formation of urban identity; it speaks to the evolution of the modern human.” — Surface Magazine

“Demonstrates the potential of public space to influence both personal lives and social conditions…. These 18 essays remind us that we bring ourselves to fill the empty spaces.” — PopMatters.com

“I found myself with city-break wanderlust after dipping into this absorbing and visually striking anthology…[of] stellar writers…. There are arresting photographs throughout.” — The Bookseller (Editor’s Choice)

“Catie Marron’s City Squares is a revelation. It takes you on an incredible journey across the world’s greatest cities and their squares through the eyes of the best writers and thinkers. With every turn of the page, you will learn something new.” — Richard Florida, nationally bestselling author of The Rise of the Creative Class and Global Research Professor at New York University

“Recommended for those with an interest in how urban spaces intersect with culture, history, and politics, and for travelers seeking a deeper understanding of these famous locations.” — Library Journal 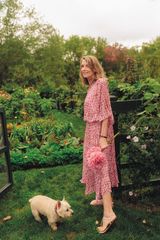 Catie Marron is the creator and editor of two anthologies published by HarperCollins which explore the value and significance of urban public spaces: City Squares, Eighteen Writers on the Spirit and Significance of Squares Around the World (2016), and City Parks: Public Places, Private Thoughts (2013). She is currently working on a third book for HarperCollins, which centers on how gardens and the process of their creation enrich lives.

Marron’s career has encompassed investment banking, magazine journalism, public service, and book publishing. She is currently a trustee and Chair Emeritus of The New York Public Library, where she was Chairman of the Board from 2004 to 2011. Marron is also a trustee of Friends of the High Line, where she was also Board Chair, and a trustee of The Metropolitan Museum of Art and the Doris Duke Charitable Foundation.

Marron began her first career in investment banking at Morgan Stanley and then at Lehman Brothers. She then became Senior Features Editor at Vogue, where she has been a contributing editor for twenty years. While writing her books, Marron launched Good Companies, a curated, online guide to companies that strive to do good while also making a profit. This venture was shaped in part by the success of Treasure & Bond, a pop-up store that she co-founded with Nordstrom and Anna Wintour in 2011. All of the store’s profits went to charities benefiting NYC children.

Other Works by Catie Marron