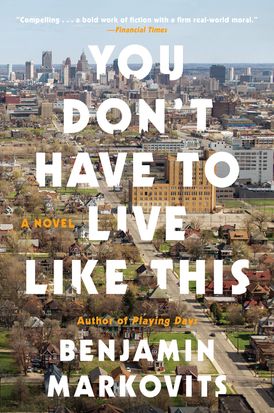 “You get in the habit of living a certain kind of life, you keep going in a certain direction, but most of the pressure on you is just momentum. As soon as you stop the momentum goes away. It’s easier than people think to walk out on things, I mean things like cities, leases, relationships and jobs.”

Greg Marnier, Marny to his friends, leaves a job he doesn’t much like and moves to Detroit, Michigan in 2009, where an old friend has a big idea about real estate and the revitalization of a once great American city. Once there, he gets involved in a fist-fight between two of his friends, a racially charged trial, an act of vigilante justice, a love affair with a local high school teacher, and a game of three-on-three basketball with the President—not to mention the money-soaked real estate project itself, cut out of 600 acres of emaciated Detroit. Marny’s billionaire buddy from Yale, Robert James, calls his project “the Groupon model for gentrification,” others call it “New Jamestown,” and Marny calls it home— until Robert James asks him to leave. This is the story of what went wrong.

You Don’t Have to Live Like This is the breakout novel from the “fabulously real” (Guardian) voice of the only American included in Granta’s Best of Young British Novelists. Using the framework of our present reality, Benjamin Markovits blurs the line between the fictional and the fact-based, and captures an invisible current threaded throughout American politics, economics, and society that is waiting to explode.

“You Don’t Have to Live Like This takes a match to a house full of gas fumes. It made me feel like I had experienced a series of episodes I would normally only encounter via the news...a heartbreaking portrait of criminal justice.” - Karl Taro Greenfeld, author of Triburbia and co-author of Dr. J: The Autobiography

“Bold and brilliant…Benjamin Markovits follows Charles Dickens and Tom Wolfe in creating a vividly real urban backdrop against which a fine, provocative story can be told.” - Prospect

“Compelling…Markovits is a spot-on observer of speech patterns and subconsciously revealing behavioral tics, and it’s the portrayal of complex relationships that keeps the plot moving. The novel is populated by intriguing characters…a bold work of fiction with a firm real-world moral.” - Financial Times

“As up-to-the-minute as a cable network’s “Breaking News” bulletin, though far more thoughtful and better examined…So few fiction writers deal directly with street-level economic and cultural conflict in the present day that you’re grateful YOU DON’T HAVE TO LIVE LIKE THIS exists at all.” - USA Today

“Engrossing …. will call to mind recent events in Ferguson, Mo., Staten Island, N.Y., and North Charleston, S.C., among others…. Markovits writes boldly about some of our era’s most important-and most delicate-subjects.” - Publishers Weekly

“Markovits’s prose is clean and restrained, and his ear for the way his characters speak is rarely off.” - Christian Lorentzen, Vulture

“This is fiction writing that is alive in your hand…Markovits’ is a voice as attuned to the soul as it is to the barrios and hoods, the kind that forms synaptic connections without ever seeming to try.” - The Independent

“A subtle and finely poised novel…shrewdly observant…Markovits uses Detroit as a rebuke to certain forms of American idealism, and does so with nuance…Characters are gradually deepened and made complex, leaving the reader complicit in a degree of judgmental behavior.” - The Spectator

“Entertaining, insightful, humorous yet of serious purpose. This is a very good novel…Marnier is a fine creation.” - Sunday Herald Scotland

“Markovits shines a much-needed light on the plight of Detroit and the racial inequalities, prejudices, and privileges that plague our nation.” - Booklist

“With the national media roiling with articles about race, justice and class, particularly in that struggling Michigan city, this story could not be more timely… Markovits is a master at describing the devastated and deserted streets of Detroit.” - Washington Post

“An impressive new novel…Perhaps Markovits’s fictional Obama, who makes the speech that gives the novel its title, is right that Americans don’t have to live ‘like this,’ divided and distrustful, but it will take more than cheap real estate and internet utopianism to make change possible.” - Laura Miller, The Guardian 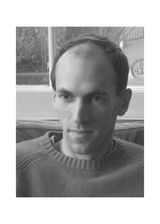 grew up mostly in Texas and London. He has published eight award-winning adult novels. He lives with his family in London, where he teaches creative writing at Royal Holloway, University of London.

Other Works by Benjamin Markovits