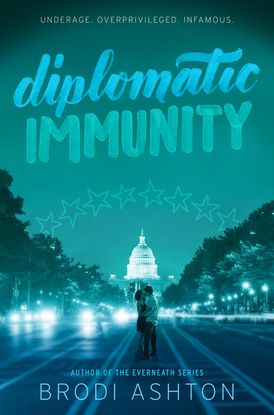 Anna and the French Kiss meets The Disreputable History of Frankie Landau-Banks in a romantic and hilarious new novel from Brodi Ashton, the author of the Everneath trilogy.

Piper Baird has always dreamed of becoming a journalist. So when she scores a scholarship to exclusive Chiswick Academy in Washington, DC, she knows it’s her big opportunity. Chiswick offers the most competitive prize for teen journalists—the Bennington scholarship—which would ensure her acceptance to one of the best schools in the country.

Piper isn’t at Chiswick for two days before she witnesses the extreme privilege of the young and wealthy elite who attend her school—and realizes that access to these untouchable students just might give her the edge she’ll need to blow the lid off life at the school in a scathing and unforgettable exposé worthy of the Bennington.

The key to the whole story lies with Rafael Amador, the son of the Spanish Ambassador—and the boy at the center of the most explosive secrets and scandals on Embassy Row. Rafael is big trouble—and when he drops into her bedroom window one night, asking for help, it’s Piper’s big chance to get the full scoop. Except Piper discovers that despite his dark streak, Rafael is smart, kind, funny, and gorgeous—and she might have real feelings for him. How can she break the story of a lifetime if it will destroy the boy she just might love?

“Diplomatic Immunity is Brodi Ashton at her absolute best—smart and funny and oh-so-romantic. It’s impossible not to laugh out loud while reading this book. Plus it has one of the most swoon-worthy love interests you’ll find in YA. A hilarious and heartfelt read.” - Cynthia Hand, author of The Last Time We Say Goodbye and the Unearthly trilogy

“I laughted. I swooned. I giggle-snorted in public. Brodi Ashton’s signature wit is perfect for this charming and romantic tale of investigative journalism, diplomatic drama, and duct-taped jeans. Don’t miss Diplomatic Immunity.” - Jodi Meadows, author of the Orphan Queen duology

“Move over, Veronica Mars, Piper Baird’s taking this case! And with Raf Amador’s kissable face involved in every inch of DC scandal, I’d investigate, too. Each page of Brodi Ashton’s Diplomatic Immunity kept me wanting more. I would not object to a Baird-Amador ticket in the next election!” - Joy N. Hensley, author of Rites of Passage

“The dialogue is snappy, the opposites-attract romance is both tangy and sweet, and Raf is definitely dreamy.” - Booklist

Praise for EVERTRUE: “Fans of the series will not be disappointed” - Booklist

Praise for EVERTRUE: “Will break some hearts.” - Kirkus Reviews

Praise for EVERNEATH: “I was pulled under by this bittersweet, beautiful retelling of the Persephone myth. Ashton’s lovely storytelling and strong-on-her-own-terms main character set this one apart. Wonderful!” - Ally Condie, bestselling author of MATCHED and CROSSED

Praise for EVERNEATH: “Ashton’s debut is complex and intriguing. Drawing inspiration from such myths as Osiris, Orpheus, and Persephone, it explores the nature of loss and longing and what it means to be alive.” - Publishers Weekly

Praise for EVERNEATH: “The author brings a fresh, innovative concept to young adult fiction with well-developed characters and a fantastic plot line .... Libraries are advised to buy multiple copies-this one will fly off the shelves.” - Voice of Youth Advocates (VOYA) (starred review)

BRODI ASHTON is also the author of Everneath, a VOYA Perfect 10 for 2011; Everbound; and Evertrue; and the coauthor, with Cynthia Hand and Jodi Meadows, of My Lady Jane. She received a bachelor’s degree in journalism from the University of Utah and a master’s degree in international relations from the London School of Economics. Brodi lives in Utah with her family. You can visit her online at www.brodiashton.blogspot.com

Other Works by Brodi Ashton