A Riddle in Ruby 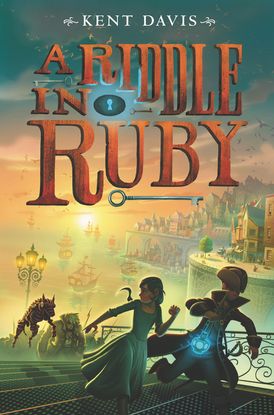 A Riddle in Ruby

Ruby is a thief-in-training and a keeper of secrets—ones she doesn't even know herself. A Riddle in Ruby is the first book in a witty and fast-paced fantasy-adventure trilogy for fans for Jonathan Stroud, Septimus Heap, and The Very Nearly Honorable League of Pirates.

Ruby Teach, daughter of a smuggler and pirate, has been learning how to swindle and steal and pick the most complex locks for as long as she can remember. But a collision with aristocratic young lord Athen sends her spinning into chaos. Little did she know that her whole life has been spent in hiding from nefarious secret societies and the Royal Navy . . . who are both now on her trail. In this debut middle grade adventure, Kent Davis weaves a rip-roaring tale through an alternate colonial Philadelphia. A world where alchemy—that peculiar mix of magic and science—has fueled the industrial revolution. With this highly original setting, a cast of fully rounded characters and rapid-fire, funny dialogue, A Riddle in Ruby will call to mind fantasy greats like Diana Wynne Jones and Terry Pratchett.

“This tale of revolutionary intent, self-discovery, and double-crossing cross-dressing is worth the trip. Sailors seeking espionage and a cast of characters who can’t sit still should embark on this series’ maiden voyage.” - Kirkus Reviews

“The world-building is fascinating, the characters entertaining, and a sequel is assured by a cliffhanger. Good fun!” - School Library Journal

“Davis’ debut novel promises adventure, magic, mystery, and alchemy, all of which it gleefully provides. …Middle–grade readers will love the magic of the Chemystral Age and will surely be on the hook for the next two books.” - ALA Booklist

“It’s worth suspending disbelief to enjoy following this intrepid heroine and her companions, who are full of surprises themselves, on their swashbuckling journey.” - Publishers Weekly

“Bound from one danger to the next with Ruby and pals, narrowly escaping bloodthirsty mechanical dogs; a terrifying, maniacal scarred man; and a haughty master of chemystry (to name just a few)… Readers will happily jump on board the promised sequel.” - Bulletin of the Center for Children’s Books

“A Riddle In Ruby has everything you could possibly want from a story: clever heroes, fiendish villains, startling plot twists, pirates, thieves, swashbuckling, adventure, action, mayhem - and plenty of humor. This is an exceptionally enjoyable, incredibly original series.”- - Stuart Gibbs, author of the New York Times-bestselling Spy School saga 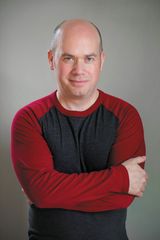 Kent Davis is the author of A Riddle in Ruby. He is also an actor, a game designer, and a teacher. He lives in Bozeman, Montana, with his wife and a wily dog ninja named Bobo. www.kentishdavis.com

Other Works by Kent Davis

A Riddle in Ruby #3: The Great Unravel