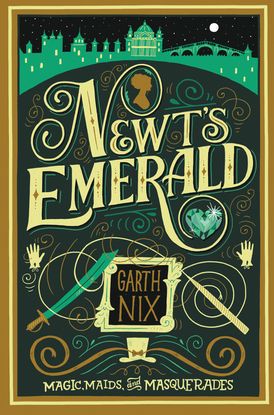 Inspired by the works of Georgette Heyer and Jane Austen, Garth Nix's Newt's Emerald is a Regency romance with a fantasy twist. New York Times bestselling author Gail Carriger calls it "charming; quite, quite charming."

After Lady Truthful's magical Newington Emerald is stolen from her she devises a simple plan: go to London to recover the missing jewel. She quickly learns, however, that a woman cannot wander the city streets alone without damaging her reputation, and she disguises herself as a mustache-wearing man. During Truthful's dangerous journey she discovers a crook, an unsuspecting ally, and an evil sorceress—but will she find the Emerald?

“A surprise from Garth Nix: A Regency romance with magic. Charming; quite, quite charming.” - Gail Carriger, New York Times bestselling author of the Parasol Protectorate and the Finishing School series

“A delightful romp with dastardly plots and romantic confusions that would do Jane Austen proud. Fans of the author and of fantasy or Regency romance will enjoy this tale immensely. - School Library Journal

“Austen fans will be drawn to the familiar era and strong, stubborn heroine, and the touch of magic. ” - Voice of Youth Advocates (VOYA)

“It’s clear that this was as much a pleasure for Nix to write as it is for readers to read, and there’s reveling in arcane language that will delight wannabe Austen-esque teens. Hand this to fans of period Masterpiece Theater sagas and Burgis’ Kat, Incorrigible.” - Bulletin of the Center for Children’s Books