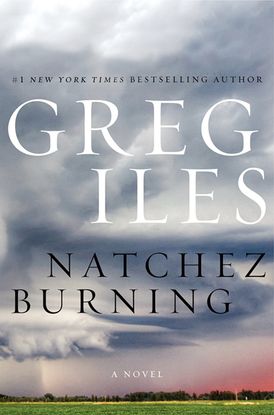 #1 New York Times bestselling author Greg Iles returns with his most eagerly anticipated novel yet and his first in five years—Natchez Burning—the first installment in an epic trilogy that interweaves crimes, lies, and secrets past and present in a mesmerizing thriller featuring Southern lawyer and former prosecutor Penn Cage.

Growing up in the rural Southern hamlet of Natchez, Mississippi, Penn Cage learned everything he knows about honor and duty from his father, Tom Cage. But now the beloved family doctor and pillar of the community is accused of murdering Violet Turner, the beautiful nurse with whom he worked in the dark days of the early 1960s. A fighter who has always stood for justice, Penn is determined to save his father, even though Tom, stubbornly evoking doctor-patient privilege, refuses to speak up in his own defense.

The quest for answers sends Penn deep into the past—into the heart of a conspiracy of greed and murder involving the Double Eagles, a vicious KKK crew headed by one of the wealthiest and most powerful men in the state. With the aid of a local friend and reporter privy to some of Natchez's oldest and deadliest secrets, Penn follows a bloody trail that stretches back forty years, to one undeniable fact: no one—black or white, young or old, brave or not—is ever truly safe.

With everything on the line, including his own life, Penn must decide how far he will go to protect those he loves . . . and see justice done, once and for all.

Rich in Southern atmosphere and electrifying plot turns, Natchez Burning marks the brilliant return of a genuine American master of suspense. Tense and disturbing, it is the most explosive, exciting, sexy, and ambitious story Greg Iles has written yet.

“A whopping tale, filled with enough cliff-hanging crises for an old summer-long movie-serial. Yet there are still enough unresolved matters at the end of Natchez Burning for two already-promised sequels.” - Wall Street Journal

“Every single page of Natchez Burning is a cliffhanger that will keep you devouring just one more chapter before you put it down.” - Jodi Picoult, New York Times bestselling author of The Storyteller

“Natchez Burning is just flat-out terrific . . . its themes about race, violence, tradition, and the eternal smoldering anger of the South [bring] to mind Thomas Wolfe and William Faulkner . . . Greg Iles is back and truly better than ever.” - Scott Turow, #1 New York Times bestselling author

“Natchez Burning is extraordinarily entertaining and fiendishly suspenseful. I defy you to start it and find a way to put it down . . . This is an amazing work of popular fiction.” - Stephen King

“An absorbing and electrifying tale that thriller fans will be sure to devour.” - Library Journal (starred review)

“It’s been half a decade since Iles’ last Penn Cage novel, but, oh boy, was it worth the wait! . . . This beautifully written novel represents some of the author’s finest work, with sharper characterizations and a story of especially deep emotional resonance, and we eagerly await volume two.” - Booklist (starred review)

“Natchez Burning obliterates the artificial distinction between genre and literary fiction with passion, grace and considerable style. This is Greg Iles at his formidable best. It’s good to have him back.” - Washington Post