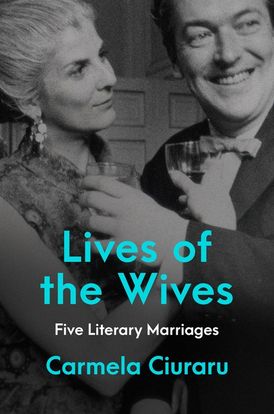 "The five marriages that Carmela Ciuraru explores in Lives of the Wives provide such delightfully gossipy pleasure that we have to remind ourselves that these were real people whose often stormy relationships must surely have been less fun to experience than they are for us to read about."—Francine Prose, author of The Vixen

A witty, provocative look inside the tumultuous marriages of five writers, illuminating the creative process as well as the role of money, power, and fame in these complex and fascinating relationships.

"With an ego the size of a small nation, the literary lion is powerful on the page, but a helpless kitten in daily life—dependent on his wife to fold an umbrella, answer the phone, or lick a stamp."

The history of wives is largely one of silence, resilience, and forbearance. Toss in celebrity, male privilege, ruthless ambition, narcissism, misogyny, infidelity, alcoholism, and a mood disorder or two, and it's easy to understand why the marriages of so many famous writers have been stormy, short-lived, and mutually destructive. "It's been my experience," as the critic and novelist Elizabeth Hardwick once wrote, "that nobody holds a man's brutality to his wife against him." Literary wives are a unique breed, requiring a particular kind of fortitude.

Author Carmela Ciuraru shares the stories of five literary marriages, exposing the misery behind closed doors. The legendary British theatre critic Kenneth Tynan encouraged his American wife, Elaine Dundy, to write, then watched in a jealous rage as she became a bestselling author and critical success. In the early years of their marriage, Roald Dahl enjoyed basking in the glow of his glamorous movie star wife, Patricia Neal, until he detested her for being the breadwinner, and being more famous than he was. Elizabeth Jane Howard had to divorce Kingsley Amis to escape his suffocating needs and devote herself to her own writing. ("I really couldn't write very much when I was married to him," she once recalled, "because I had a very large household to keep up and Kingsley wasn't one to boil an egg, if you know what I mean.") Surprisingly, the most traditional partnership in Lives of the Wives is a lesbian couple, Una Troubridge and Radclyffe Hall, both of whom were socially and politically conservative and unapologetic snobs.

As this erudite and entertaining work shows, each marriage is a unique story, filled with struggles and triumphs and the negotiation of power. The Italian novelists Elsa Morante and Alberto Moravia were never sexually compatible, and it was Morante who often behaved abusively toward her cool, detached husband, even as he unwaveringly admired his wife's talents and championed her work. Theirs was an unhappy union, yet it fueled them creatively and enabled both to become two of Italy's most important postwar writers.

These are stories of vulnerability, loneliness, infidelity, envy, sorrow, abandonment, heartbreak, and forgiveness. Above all, Lives of the Wives honors the women who have played the role of muses, agents, editors, proofreaders, housekeepers, gatekeepers, amaneunses, confidantes, and cheerleaders to literary trailblazers throughout history. In revisiting the lives of famous writers, it is time in our #MeToo era to highlight the achievements of their wives—and the price these women paid for recognition and freedom.

Lives of the Wives is an insightful, humorous, and poignant exploration of the intersection of life and art and creativity and love.

“Eye-opening . . . . A rare window into five relationships providing a respectful yet unflinching look inside the daily, often complicated lives of the writers and their wives. . . .The reality is often harsh—but also fascinating. An illuminating, well-rendered literary biography.”
— Kirkus Reviews (Starred Review)

Carmela Ciuraru is the author of Nom de Plume: A (Secret) History of Pseudonyms, and her anthologies include First Loves: Poets Introduce the Essential Poems That Captivated and Inspired Them and Solitude Poems. She is a member of PEN American and the National Book Critics Circle, and she has been interviewed on The Today Show and by newspapers and radio stations internationally. She lives in New York City.

Other Works by Carmela Ciuraru