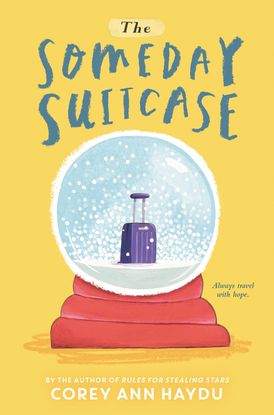 Readers who loved The Thing About Jellyfish and Goodbye Stranger will find a mysterious magic and unforgettable friendship in The Someday Suitcase, written by the critically acclaimed author of Rules for Stealing Stars.

Clover and Danny are the kind of best friends who make each other even better. They’re so important to each other that Clover believes they’re symbiotic: her favorite science word, which describes two beings who can’t function without the other. But when Danny comes down with a mysterious illness that won’t go away, the doctors can’t figure out what’s wrong with him. So Clover decides to take matters into her own hands by making lists—list of Danny’s symptoms, his good days, his bad days.

As the evidence piles up, only one thing becomes clear: Danny is only better when Clover is around.

Suddenly it feels like time is running out for Clover and Danny to do everything they’ve planned together—to finally see snow, to go on a trip with the suitcase they picked out together. Will science be able to save Danny, or is this the one time when magic can overcome the unthinkable?

“A touch of magic, the promise of snow, and so much love I can barely keep it together to write this sentence. I know Clover and Danny will stick with me for a long, long time.” — Kate Milford, New York Times bestselling author of The Greenglass House

★ “Haydu’s second middle-grade novel is poignant and powerful. A heartbreaking story about the healing power of friendship amid human fragility.”   — Booklist (starred review) 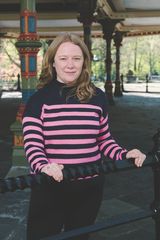 Corey Ann Haydu is the author of Eventown and other acclaimed novels for children and young adults. She grew up in the Boston area, earned her MFA at the New School, and now lives in Brooklyn with her husband and her toddler daughter, who hasn’t yet discovered the delight of tea parties with her abuelita, but is already curious enough to make an excellent detective. Find out more at www.coreyannhaydu.com.

Other Works by Corey Ann Haydu

One Jar of Magic