A People's History of Self-Determination 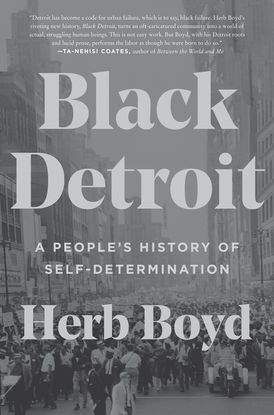 A People's History of Self-Determination

The author of Baldwin’s Harlem looks at the evolving culture, politics, economics, and spiritual life of Detroit—a blend of memoir, love letter, history, and clear-eyed reportage that explores the city’s past, present, and future and its significance to the African American legacy and the nation’s fabric.

Herb Boyd moved to Detroit in 1943, as race riots were engulfing the city. Though he did not grasp their full significance at the time, this critical moment would be one of many he witnessed that would mold his political activism and exposed a city restless for change. In Black Detroit, he reflects on his life and this landmark place, in search of understanding why Detroit is a special place for black people.

Boyd reveals how Black Detroiters were prominent in the city’s historic, groundbreaking union movement and—when given an opportunity—were among the tireless workers who made the automobile industry the center of American industry. Well paying jobs on assembly lines allowed working class Black Detroiters to ascend to the middle class and achieve financial stability, an accomplishment not often attainable in other industries.

Boyd makes clear that while many of these middle-class jobs have disappeared, decimating the population and hitting blacks hardest, Detroit survives thanks to the emergence of companies such as Shinola—which represent the strength of the Motor City and and its continued importance to the country. He also brings into focus the major figures who have defined and shaped Detroit, including William Lambert, the great abolitionist, Berry Gordy, the founder of Motown, Coleman Young, the city’s first black mayor, diva songstress Aretha Franklin, Malcolm X, and Ralphe Bunche, winner of the Nobel Peace Prize.

With a stunning eye for detail and passion for Detroit, Boyd celebrates the music, manufacturing, politics, and culture that make it an American original.

“Comprehensive and compelling... We owe [Boyd] a debt of gratitude.” - Washington Post

“A blend of memoir, love letter, history, and clear-eyed reportage that explores the city’s past, present, future and its significance to the African-American legacy and the nation’s fabric.” - Detroit Free Press

“Detroit has found its griot in Herb Boyd. Traditional West African storytellers, griots carry their people’s traditions from generation to generation, and are renowned for their encyclopedic knowledge, their wit and their ability to bridge the past and present. In the tradition of the griot, Boyd’s purpose is to celebrate the black men and women, the city’s “fearless freedom fighters,” who would otherwise remain on history’s margins. The characters who walk across Boyd’s pages are fascinating.” - New York Times Book Review

“Boyd...breathes new life into the history of Detroit through stories of the city’s black residents from its earliest days to its bittersweet present... He leaves no stone unturned, making his work an invaluable repository of all that is black Detroit.” - Publishers Weekly (starred review)

“An inspiring, illuminating book that will interest students of urban history and the black experience.” - Kirkus Reviews

“The extensive coverage demonstrates the full range and influence of black citizens in Detroit… Recommended for anyone interested in Detroit or in urban history.” - Library Journal

“Herb Boyd has done it again. Black Detroit is a powerful, timely, and important history of an iconic city whose hopes and dreams, triumphs and tragedies, continue to both challenge and shape the African American experience and American democracy. This brilliant history is a must read for students, scholars, and all those interested in the history of the civil rights movement and black freedom struggle.” - Peniel E. Joseph, Author of Stokely: A Life

Herb Boyd is a journalist, activist, teacher, and author or editor of twenty-three books, including his latest, The Diary of Malcolm X, edited with Ilyasah Al-Shabazz, Malcolm X’s daughter. His articles have been published in the Black Scholar, Final Call, the Amsterdam News, Cineaste, Downbeat, the Network Journal, and the Daily Beast. A scholar for more than forty years, he teaches African American history and culture at the City College of New York in Harlem, where he lives.

Other Works by Herb Boyd