Zoey Fools Around and Jake Finds Out 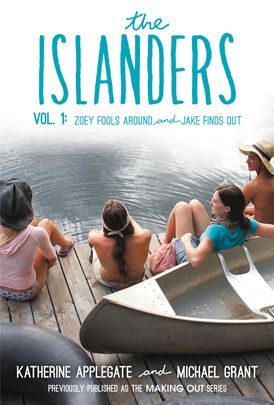 Zoey Fools Around and Jake Finds Out

On a small island it's easy to know everything about your friends . . . except for the truth. The first two books of bestselling authors Katherine Applegate and Michael Grant's beloved series about New England's most unforgettable teens are now available in one volume!

Two years ago the tiny New England community on Chatham Island was rocked by tragedy—three teenagers had a terrible accident that left one dead. Now Lucas Cabral, the person responsible for the events on that fateful night, has returned. But life on the island isn't the same, and everyone Lucas once considered a friend refuses to speak to him. Everyone except for Zoey Passmore.

Zoey knows that Lucas is off-limits . . . but she can't seem to stay away from him. Even though she knows it would be better for everyone if he had never come back. Even though she is dating Jake, the brother of the boy who died. As Lucas and Zoey grow closer, Zoey risks tearing apart her close-knit group of friends if they discover the truth . . . that she's falling for her boyfriend's worst enemy.

The Magnificent 12: The Trap

The Magnificent 12: The Key