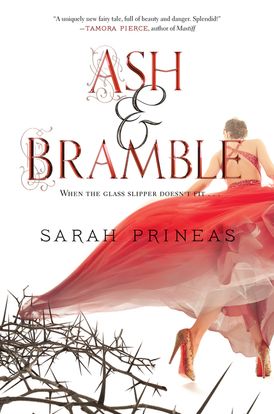 "A delightful deconstruction of society’s fairy tale myth, wrapped in an exquisite, spellbinding adventure. A must-read for teens who yearn to forge their very own story." —Rae Carson, author of the bestselling Girl of Fire and Thorns trilogy

The tale of Cinderella has been retold countless times. But what you know is not the true story.

Sarah Prineas’s bold fairy-tale retelling is a dark and captivating world where swords are more fitting than slippers, young shoemakers are just as striking as princes, and a heroine is more than ready to rescue herself before the clock strikes midnight.

Pin has no recollection of who she is or how she got to the Godmother’s fortress. She only knows that she is a Seamstress, working day in and out to make ball gowns fit for fairy tales. But she longs to forsake her backbreaking servitude and dares to escape with the brave young Shoemaker.

Pin isn’t free for long before she’s captured again and forced to live the new life the Godmother chooses for her—a fairy-tale story, complete with a charming prince—instead of finding her own happily ever after.

As Pin tries to fight her arranged path, she finds that a sword is a much better fit for her than a glass slipper, and that the boy who she escaped with is still searching for her, and won’t stop until he rescues her—if Pin doesn’t rescue herself first.

Ash & Bramble is a delightful deconstruction of society’s fairy tale myth, wrapped in an exquisite, spellbinding adventure. A must-read for teens who yearn to forge their very own story. — Rae Carson, author of the best-selling Girl of Fire and Thorns trilogy

“Ash & Bramble is a book written for anyone who wants to decide for themselves what path their life should take.” — Voice of Youth Advocates (VOYA) (starred review)

“The romance absolutely aches. A fresh fairy-tale retelling.” — ALA Booklist

The Lost Books: The Scroll of Kings

The Magic Thief: A Proper Wizard