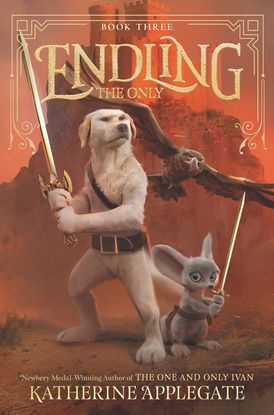 The thrilling conclusion to the epic middle grade fantasy trilogy from Katherine Applegate, the New York Times bestselling and Newbery Award-winning author of The One and Only Ivan (now a major motion picture!), The One and Only Bob, Wishtree, and Crenshaw!

In the beginning, Byx’s original quest was to discover if there were more of her kind, or if she was destined to become an endling—the last dairne alive. She did indeed find more dairnes, and along the way she also created allies among other creatures in her world, including humans, felivets, raptidons, and wobbyks.

But Byx and her new friends soon learned that it wasn’t just dairnes in jeopardy of extinction, but that everyone was at risk. With the world in unprecedented danger, Byx must rally creatures of all kinds to lead a revolution.

Katherine Applegate’s Endling series has so far earned a collective five starred reviews, and each of the prior books has debuted on the New York Times bestseller list. She once again delivers an action-packed middle grade fantasy with a unique setting, enthralling characters, and gripping adventure that is perfect for fans of Rick Riordan, Brian Jacques, and Tui T. Sutherland.

PRAISE FOR Endling #2: “Themes of conservation, war, and human trafficking are skillfully interwoven into a world of magic and wonder. This second installment will have readers salivating for a third. Simply sublime.” — Kirkus Reviews (starred review)

“Themes of truth, sacrifice, and unity are pitted against that of corrupt power fueled by murder and ideas of species superiority. Applegate’s commentary on the need for diversity and understanding is clear but not heavy handed. Byx must learn to lead herself—and readers will follow without hesitation.” — ALA Booklist

“Endling: The First has so much to offer: suspense, drama and deep emotion, not to mention high stakes. It’s set to be the book of the summer.” — New York Times

PRAISE FOR Endling #1: “Applegate effortlessly constructs her fantasy world, briskly moving readers through its imaginative details while creating winning, unique characters. This epic series starter is a bracing, propulsive read that will be a challenge to keep on the shelf.” — ALA Booklist (starred review)

“Fantasy lovers are in for a treat with this smartly paced, enthralling adventure that pairs novel and exciting world-building with classic high fantasy tropes and political intrigue. Applegate’s characters feel fresh and modern, and their questioning of the status quo will resonate with today’s middle graders. The heart and courage Byx and her companions must find within as they stand up against unimaginable odds will inspire and delight. A sweeping fantasy epic for the middle grade set that will have readers clamoring for a follow-up.” — School Library Journal (starred review)

“Applegate skillfully builds a fully realized world of intrigue and wonder without ever letting up on the story’s quick pace. Themes of genocide, conservation, and magic are interwoven, providing thought-provoking questions for astute readers and educators. A savvy choice for readers of fantasy; individual readers and book clubs will love it and demand to know when the sequel will be available.” — Kirkus Reviews (starred review)

“The gripping first installment of Applegate’s new fantasy trilogy assembles a motley crew in a suspenseful, tautly drawn quest. Persuasive emotional underpinnings give depth and urgency to the adventure as the team unites against sinister forces.” — Publishers Weekly (starred review)

"Endling: The Last blends careful and often lovely prose into a wild, fast-paced fantasy. Readers will fall in love with Byx and race with her through Nedarra, breathless and eager, thinking deeply all the way.” — New York Times Book Review

“The first book in a new series, this volume will whet readers’ appetites for more of Byx’s fascinating world and the next stage of her quest. Give this to lovers of animal fantasies and environmentally minded readers.” — Bulletin of the Center for Children’s Books

PRAISE FOR The One and Only Ivan: “Will capture readers’ hearts and never let go. A must have." — School Library Journal (starred review)

“Animal-loving youngsters and their adults will find plenty of food for thought in Ivan’s extraordinary story.” — Bulletin of the Center for Children’s Books (starred review)

Katherine Applegate's many books include the Roscoe Riley Rules chapter book series, the picture book The Buffalo Storm, and the award-winning novel Home of the Brave. With her husband, Michael Grant, she wrote the hugely popular series Animorphs, which has sold more than 35 million copies worldwide.

Katherine was inspired to write The One and Only Ivan after reading about the true story of a captive gorilla known as Ivan, the Shopping Mall Gorilla. The real Ivan lived alone in a tiny cage for twenty-seven years at a shopping mall before being moved to Zoo Atlanta after a public outcry. He was a beloved celebrity at the zoo, which houses the nation's largest collection of western lowland gorillas. Ivan was well known for his paintings, which he "signed" with a thumbprint.

Katherine lives in California with her husband and two children.