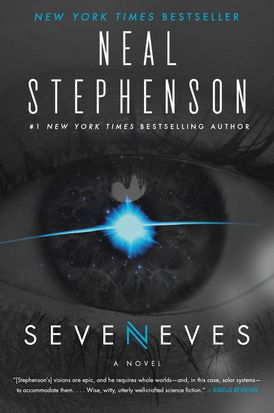 “Stephenson’s remarkable novel is deceptively complex, a disaster story and transhumanism tale that serves as the delivery mechanism for a series of technical and sociological visions… there’s a ton to digest, but Stephenson’s lucid prose makes it worth the while.” — Publishers Weekly (starred review)

“The huge scope and enormous depth of the latest novel from Stephenson is impressive… a major work of hard sf that all fans of the genre should read.” — Library Journal (starred review)

“Well-paced over three parts covering 5,000 years of humanity’s future, Stephenson’s monster of a book is likely to dominate your 2015 sf-reading experience.” — Booklist

“Written in a wry, erudite voice...Seveneves will please fans of hard science fiction, but this witty, epic tale is also sure to win over readers new to Stephenson’s work.” — Washington Post

“Seveneves offers at once [Stephenson’s] most conventional science-fiction scenario and a superb exploration of his abiding fascination with systems, philosophies and the limits of technology.… Stephenson’s central characters, mostly women, serve as a welcome corrective to science-fiction clichés.” — Chicago Tribune

“Seveneves can be fascinating. . . . Insights into the human character shine like occasional full moons.” — Boston Globe

“[A] novel of big ideas, but it’s also a novel of personalities, of heart, and of a particular kind of hope that only comes from a Stephenson story. Science fiction fans everywhere will love this book.” — BookPage

“Stephenson… knows the life-sustaining power of storytelling, since storytelling is what he does…Today’s post-apocalyptic stories routinely aim to convey the loss of the old world through the personal losses of a few characters. Stephenson makes you feel the loss of Earth on the scale it deserves.” — Salon

“This is hard sci-fi in a real and welcome sense, ruled by unremitting physical laws, unlike the negotiable rules of the action thriller.” — Nature

“Stephenson’s storytelling style combines the conversational and the panoramic, allowing him to turn his piercing gaze on the familiar aspects of a strange future, encompassing the barely conceivable detail by detail.” — Seattle Times

NEAL STEPHENSON is the author of: Fall or, Dodge in Hell; The Rise and Fall of D.O.D.O. (with Nicole Galland); Seveneves, Reamde, Anathem; the three-volume historical epic The Baroque Cycle (Quicksilver, The Confusion, and The System of the World); Cryptonomicon, The Diamond Age, Snow Crash and Zodiac, and the groundbreaking nonfiction work In the Beginning . . . Was the Command Line.