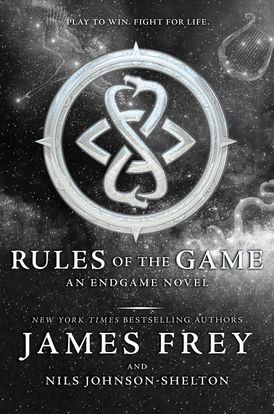 The explosive final novel in the Endgame trilogy. Two keys have been found. The strongest Players are left. One final key remains to win Endgame and save the world.

For Sarah, Jago, Aisling, Maccabee, Shari, An, and Hilal, Endgame has reached its final phase. The third key, Sun Key, is all that stands between one Player saving their line—or perishing along with the rest of the world. And only one can win.

West Bengal, India: Maccabee is Playing to win. He has Earth Key and Sky Key and he is determined to find Sun Key. But in Endgame, fate can turn in the blink of an eye. He must Play carefully. He must watch his back.

Kolkata, India: An Liu is Playing for death. His goal: stop Endgame, and take the world down with him.

Sikkim, India: For Aisling, Sarah, Jago, Shari, and Hilal, their mission is to stop Endgame. Sun Key must not be found.

No matter what they’re Playing for, all of the remaining Players have one thing in common: they will end the game, but on their own terms.

Praise for ENDGAME: SKY KEY:
“Frey and Johnson-Shelton up the ante with hooks at every chapter.” - ALA Booklist

“The action is rapid, moving from Player to Player and around the world without missing a beat.” - Voice of Youth Advocates (VOYA)

Praise for ENDGAME: THE CALLING:
“The treasure hunters of the world may want to dust off their tools.” - USA Today

“A unique dystopian adventure with anchors to the real world...set to become a cultural phenomenon.” - ALA Booklist

“This book is fantastic. On every level. Please just go read it and try and disagree with me. I dare you.” - The Guardian

“You officially have my attention, James Frey. And to anyone reading this, the challenge is on.” - Bustle.com

“Endgame is like The Hunger Games on steroids.” - Voice of Youth Advocates (VOYA)

“The premise is engaging, in a Hunger Games-meets-National Treasure sort of way, and the diverse global cast is welcome.” - Publishers Weekly

James Frey is originally from Cleveland. He is the author of the bestselling novels, A Million Little Pieces and My Friend Leonard. He lives in New York.