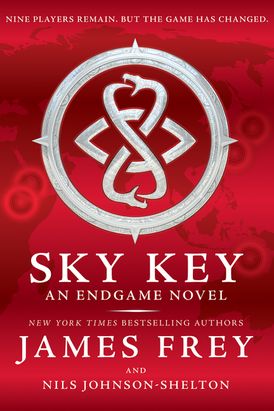 The Endgame trilogy continues in the sequel to the New York Times bestseller Endgame: The Calling. Endgame is here. Earth Key has been found. Two keys—and nine Players—remain. The hunt for Sky Key has begun.

Queens, New York. Aisling Kopp believes the unthinkable: that Endgame can be stopped. But before she can act on her own, she is approached by the CIA. And they have their own ideas about how Endgame should be Played.

Kingdom of Aksum, Ethiopia. Hilal ibn Isa al-Salt narrowly survived an attack that leaves him horribly disfigured. But the Aksumites have a secret that is unique to their line. A secret that could help redeem all of humanity.

London, England. Sarah Alopay has found the first key. But getting Earth Key has come at a great cost to Sarah. And the only thing that keeps the demons at bay is Playing. Playing to win.

With only two keys left to claim, the remaining Players will stop at nothing to find Sky Key—wherever it is, whatever it is—as the world begins to crumble.

Praise for ENDGAME: SKY KEY:
“Frey and Johnson-Shelton up the ante with hooks at every chapter.” — ALA Booklist

“The action is rapid, moving from Player to Player and around the world without missing a beat.” — Voice of Youth Advocates (VOYA)

Praise for ENDGAME: THE CALLING:
“The treasure hunters of the world may want to dust off their tools.” — USA Today

“A unique dystopian adventure with anchors to the real world… set to become a cultural phenomenon.” — ALA Booklist

“This book is fantastic. On every level. Please just go read it and try and disagree with me. I dare you.” — The Guardian

“You officially have my attention, James Frey. And to anyone reading this, the challenge is on.” — Bustle.com

“Endgame is like The Hunger Games on steroids.” — Voice of Youth Advocates (VOYA)

“The premise is engaging, in a Hunger Games-meets-National Treasure sort of way, and the diverse global cast is welcome.” — Publishers Weekly

James Frey is originally from Cleveland. All four of his books, A Million Little Pieces, My Friend Leonard, Bright Shiny Morning, and The Final Testament of the Holy Bible, were international bestsellers.