The Astounding Interconnectedness of the Universe 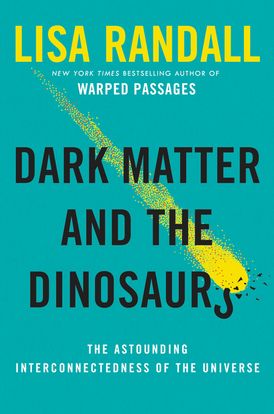 The Astounding Interconnectedness of the Universe

In this brilliant exploration of our cosmic environment, the renowned particle physicist and New York Times bestselling author of Warped Passages and Knocking on Heaven’s Door uses her research into dark matter to illuminate the startling connections between the furthest reaches of space and life here on Earth.

Sixty-six million years ago, an object the size of a city descended from space to crash into Earth, creating a devastating cataclysm that killed off the dinosaurs, along with three-quarters of the other species on the planet. What was its origin? In Dark Matter and the Dinosaurs, Lisa Randall proposes it was a comet that was dislodged from its orbit as the Solar System passed through a disk of dark matter embedded in the Milky Way. In a sense, it might have been dark matter that killed the dinosaurs.

Working through the background and consequences of this proposal, Randall shares with us the latest findings—established and speculative—regarding the nature and role of dark matter and the origin of the Universe, our galaxy, our Solar System, and life, along with the process by which scientists explore new concepts. In Dark Matter and the Dinosaurs, Randall tells a breathtaking story that weaves together the cosmos’ history and our own, illuminating the deep relationships that are critical to our world and the astonishing beauty inherent in the most familiar things.

“Successful science writing tells a complete story of the ‘how’-the methodical marvel building up to the ‘why’-and Randall does just that.” — New York Times Book Review

“A cracking read, combining storytelling of the highest order with a trove of information on subjects as diverse as astrophysics, evolutionary biology, geology and particle physics. What’s remarkable is that it all fits together.” — Wall Street Journal

“The universe, Randall eloquently argues, is an organic thing, a symphonic thing, with all its myriad parts contributing their own notes.” — Time Magazine

“Randall succeeds in guiding the reader through the history of the cosmos and the Earth from the Big Bang to the emergence of life as we know it in a fun and captivating way. . . . [This is] a very enjoyable read for both lay readers and scientists.” — Science Magazine

“The nature of the impactor remains unknown, but if it was indeed a comet dislodged from the Oort Cloud, then Randall’s book provides an entertaining and radical explanation of the events leading up to their ultimate extinction.” — Philadelphia Inquirer

“Through Randall’s brilliant research we see a universe unfold that is far grander than anyone at any time could have imagined… She is a progressive thinker, a visionary capable of bridging the vast gulf between speculation and reality science.” — San Francisco Book Review

“Randall, a Harvard professor, is one of the world’s leading experts on particle physics and cosmology. In Dark Matter and the Dinosaurs, she takes readers on an illuminating scientific adventure, beginning 66 million years ago, that connects dinosaurs, comets, DNA, and the future of the planet.” — Huffington Post

“Brilliant and thought provoking…The greatest strength of Randall’s book is that it lacks any overly academic jargon and is reasonably easy to understand. Dark Matter and the Dinosaurs illustrates beautifully that there is so much left to be discovered about ourselves and the universe that we call home.” — BUST

“The nature of the impactor remains unknown, but if it was indeed a comet dislodged from the Oort Cloud, then Randall’s book provides an entertaining and radical explanation of the events leading up to their ultimate extinction.” — Physics World

“The nature of the impactor remains unknown, but if it was indeed a comet dislodged from the Oort Cloud, then Randall’s book provides an entertaining and radical explanation of the events leading up to their ultimate extinction.” — WHYY Radio Times

“Mind-blowing. . . . If [Randall is] correct. . . . it would be a revolution in human thought every bit as gargantuan as that precipitated by Copernicus. — House of Speakeasy Blog

“The nature of the impactor remains unknown, but if it was indeed a comet dislodged from the Oort Cloud, then Randall’s book provides an entertaining and radical explanation of the events leading up to their ultimate extinction.” — On Being with Krista Tippett

“[Randall’s] is a fascinating, tantalizing theory, linking life on Earth-or the extinction thereof-with the very origins of our universe.” — Publishers Weekly, Starred Review

“Engrossing in its own right, this theory opens onto an illuminating survey of the cutting-edge science now deployed to test its components, including its daring redefinition of dark matter. As she did in Warped Passages (2005) and Knocking on Heaven’s Door (2011), Randall delivers intellectual exhilaration.” — Booklist, Starred Review

“Writing in a deceptively chatty narrative style, Randall provides a fascinating window into the excitement of discovery and the rigor required to test and elaborate new hypotheses. A top-notch science book from a leading researcher.” — Kirkus, Starred Review

Only Lisa Randall can take us on such a thrilling scientific journey—from dinosaurs to DNA to comets to dark matter and to past and future of our species. Randall’s research is so thorough, the story so powerful, and her storytelling so compelling that I could not put this book down.” — Siddhartha Mukherjee, author of Emperor of All Maladies

“The nature of the impactor remains unknown, but if it was indeed a comet dislodged from the Oort Cloud, then Randall’s book provides an entertaining and radical explanation of the events leading up to their ultimate extinction.” — Walter Kirn, author of Blood Will Out and Up In the Air

“The wonder and curiosity Lisa Randall so obviously feels about our world and the universe itself is evident on every page. [Randall] render[s] complex subject matter into a gripping page-turner that is impossible to put down. Dark Matter and the Dinosaurs is a fascinating, mind-expanding experience.” — Augusten Burroughs, author of This is How and Running with Scissors

“Lisa Randall has produced an intriguing, insightful book that brilliantly weaves together the disparate subjects of cosmology and biology. . . . A simple, elegant theory that finally makes sense of mass extinctions. A must read for anyone interested in the precariousness of life on earth.” — Jack Horner, MacArthur Fellow and author of How To Build a Dinosaur

“Dark Matter and the Dinosaurs is . . . a masterpiece of science writing: a detective story that illuminates the nature of scientific research while explaining how our very existence may be connected to unexpected properties of the dark matter that fills the universe.” — Kip Thorne, Feynman Professor of Theoretical Physics at CalTech

“A provocative and revealing account of how scientists like herself are uncovering deep connections between human existence and the wider universe. A terrific read.” — Timothy Ferris, author of Coming of Age in the Milky Way and Seeing in the Dark

“World-renowned physicist Lisa Randall brings a fresh twist to one of the world’s oldest murder mysteries, the death of the dinos. With lively writing and wonderfully accessible explanations, she now convincingly implicates a new suspect as ultimately responsible for the hit: a novel kind of dark matter.” — Max Tegmark, physicist and author of Our Mathematical Universe

“It’s a tall order to cover everything from the Big Bang to today’s ongoing Sixth Extinction in a consistently engaging way for a general audience. Particle physicist Randall delivers, peppering serious science with anecdotes about Roombas and fortune cookie messages.” — Discover Magazine

“By grounding one in the principles of cosmology, particle physics, geology, astrophysics, paleontology and meteoritics, Randall provides the reader with a broad spectrum look at not only the world around them, but the worlds around that world, the galaxies and galactic clusters, filaments, sheets and, eventually, the Universe.” — Paste

Other Works by Lisa Randall